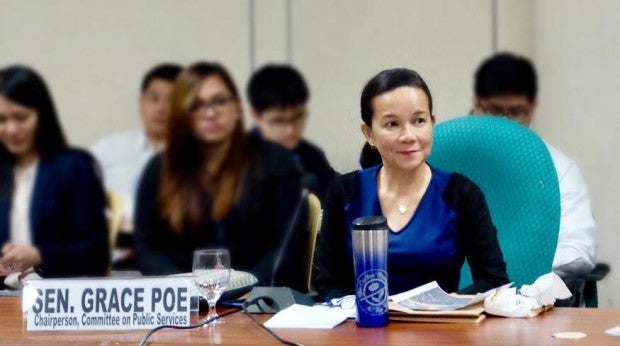 Sen. Grace Poe praised the Department of Transportation (DOTr) for operating 13 trains of the Metro Railway Transit (MRT) 3 early Tuesday, wishing that it would keep its promise of increasing the number to 20.

“We hope this will be the start of the promised resurrection of MRT’s services and the reversal of its abysmal record of unfortunate events,” Poe said in a statement.

By early evening Tuesday, 15 trains were running, the same number the previous day.

The DOTr had committed to run at least 15 trains daily by April following an extensive maintenance work during the Lenten break.

The increased number of MRT 3 trains was an improvement from the seven to eight trains a few months earlier that angered hundreds of thousands of commuters who relied on them daily.

But it was still below the line’s maximum capacity of 24 trains.

On Monday, DOTr and MRT 3 officials congratulated themselves for deploying a 15th train, the first time the line operated the same number in almost four months.

Poe, who chairs the public services committee, said she wanted the DOTr to also update the Senate on the status of the 48 coaches bought from China.

The China-made coaches, which were acquired during the previous administration but have not been used due to alleged safety problems, are now being checked by the DOTr.

“We know we have a long way to go before we can have a train system at par with developed countries. But 13 and soon, 20 trains are better than seven or eight. We will keep watch until we have a train system that is affordable, efficient, safe and comfortable, because the public deserves no less,” Poe said.

“It is all right to ‘celebrate’ the operation of more trains but this needs to be tempered by the reality that many of the trains are already old. At some point, [the] government needs to address the question of procuring new trains to ensure that the MRT will operate at optimum levels. This must also be addressed,” Reyes told the Inquirer.

The China-made coaches are being checked for safety and their compatibility with the train MRT 3 system by the third party auditing company, TUV Rheinland.

The partial report on the P3.8-billion train cars is expected to be submitted to the DOTr this week. Even then, commuters would have to wait a little longer before they could ride on the China trains as other tests, including a weight test, have yet to be scheduled by the DOTr. —With reports from Christine O. Avendaño and Jovic Yee