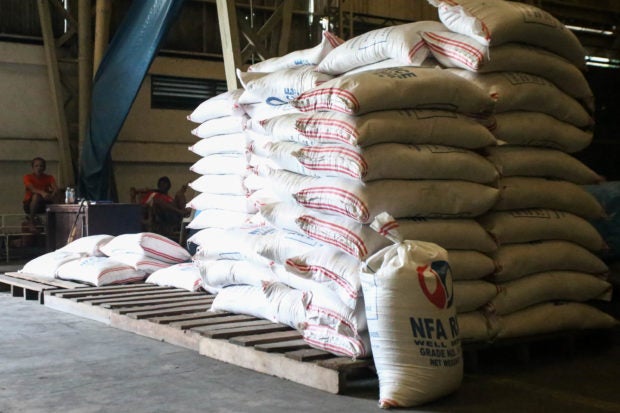 National Food Authority (NFA) announced that its stocks could only fill up the country’s requirements for two days. There are few sacks of rice left in their warehouse at Visayas Avenue, Quezon City. INQUIRER PHOTO/ JAM STA ROSA

Malacañang on Tuesday asked consumers not to panic, following reports that the National Food Authority (NFA) had run out of buffer stock, saying there was enough rice in the country.

“We all know that the stocks of NFA are low, but the overall rice supply is more than sufficient with plenty to spare,” said Menardo Guevarra, senior deputy executive secretary.

Guevarra also said there was no reason for rice prices to increase and any unusual spikes in prices could only be due to manipulation.

The government would keep a close watch on prices and attempts to manipulate these, he said.

Assistant Secretary Jonas Soriano, of the Office of the Cabinet Secretary, also said the NFA managed only 4 to 5 percent of rice in the market, which was the reason that its dwindling reserve should not be used as an excuse to raise prices.

“Everybody is pointing out that if you want to influence the price of rice, you must control 10 to 15 percent of the rice distribution,” Soriano said.

But data from the Philippine Statistics Authority showed that rice prices increased by as much as 47 percent as a result of the absence of NFA rice in the market.