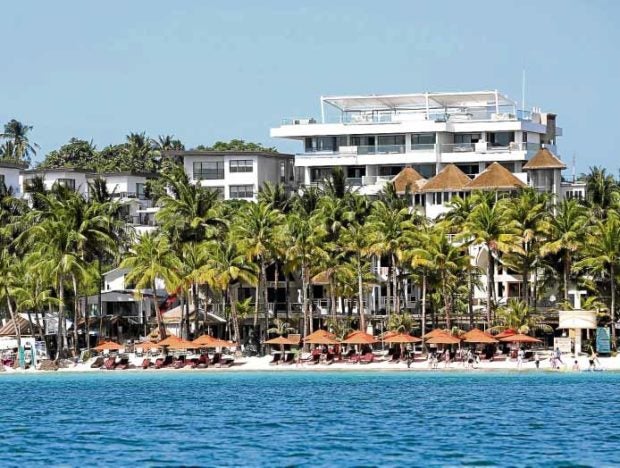 PRIME DESTINATION While the Department of Environment and Natural Resources and other agencies are planning ways of rehabilitating the country’s tourism jewel, Boracay, from environmental decay, the island’s problems have become serious because of years of government neglect. —LYN RILLON

BORACAY ISLAND, Aklan — On the beach of Bulabog along the eastern coastline of Boracay, Ming Chen, her three female friends and their children are picking up trash.

They are doing their share in keeping Boracay a “jewel” island, said Ming, a resident of Hong Kong who spends every year up to 10 days here, her favorite vacation place, for the past 20 years.

She is saddened that the island has “really evolved not for the better.”

Days earlier, the Duterte administration announced that it would shut down the world-renowned tourist destination to deal with its worsening environmental and other problems.

“You just want to do what you can,” Ming told the Inquirer. “But who is really responsible [for] cleaning up? Our children have grown up on these beaches.”

Many residents and business operators, who support the national government’s crackdown on violations of environmental and local laws, want only offenders to be held accountable, especially those who have failed to enforce the laws and regulations on the 1,032-hectare island.

The Department of the Interior and Local Government (DILG) is looking into administrative and criminal charges against local officials and private individuals who allowed the unregulated development of the island and failed to stop the illegal discharge of sewage, the building of structures in wetlands and forest areas, and other wrongdoing.

Malay municipality, which has jurisdiction over Boracay, has approved at least 52 ordinances to protect the environment. These cover marine conservation and protection, garbage and sanitation, zoning and construction regulation, and even stray dogs, smoking, signs and billboards.

But residents and tourists have lamented the wanton violation and disregard of these laws.

“We … are bearing the brunt because of these corrupt and negligent officials,” said one woman, who asked not to be named as she was related to some of the officials.

One key measure, Municipal Ordinance No. 188, which was passed in 2003, calls for mandatory connection to the sewerage system of all commercial establishments and homes within 61 meters of the system.

Those outside are required to build sewage or wastewater treatment plants.

Violators face a fine of P2,000, cancellation or denial of business permits, and imprisonment of one day to six months.

Instead of complying with the law, many commercial and residential buildings discharge illegally into canals intended only for rain and surface run.

Local officials have also revised some ordinances to cater to the tourism boom, further straining the island’s natural resources.

It revised the law that allowed only up to four-story buildings on lots of at least 1,000 sq m. Originally, only single-story structures made of local materials were allowed.

“[Municipal] and provincial officials have been complacent and helpless [in enforcing the rules and regulations],” said an expatriate, who operates a business on the island.

Violations are tolerated due to political accommodations by officials who come from a few intertwined and entrenched families, the expatriate said.

John Yap served as mayor for two terms from 2010 to 2016. He is the son of Jose Yap, a former Malay mayor and former Aklan provincial board member.

Local officials are also being investigated in connection with the collection and use of environmental, terminal and other fees from tourists.

Municipal Ordinance No. 250, passed in 2005, mandates the collection of an environmental fee every time a tourist goes to the island. The fee goes to a trust fund.

Though the fund is allocated “exclusively for environmental and tourism programs and projects” in Malay, the amount is shared by the municipal government (85 percent) and provincial government (15 percent).

From P50, the environmental fee was increased to the current P75.

Municipal officials have repeatedly said the fees are used for environmental projects and expenses, especially garbage collection and transfer from Boracay to the mainland.

But there has been no regular and detailed reporting of these expenses.

“They are not transparent at all with these fees,” said the expatriate, who has been living on the island for 30 years but asked not to be identified so as not to antagonize the officials.

Cawaling has denied being remiss in his responsibilities, stressing that the problems and concerns of Boracay could not be solved by the municipal government alone.

He said he was ready to face any charges to be filed by the national government against him.

Officials to be charged

Assistant Secretary Epimaco Densing III of the DILG, chair of a 12-member special investigating team, said a complaint for serious neglect of duty would be filed in the Office of the Ombudsman against officials on or before April 14.

Asked who would be named respondents, Densing said these would likely include “many” officials of Malay town.

He said that aside from elected officials, the respondents would include those responsible for issuing building permits.

Residents and business operators are also demanding that officials of the Department of Environment and Natural Resources (DENR) and the Department of Tourism also be investigated for the widespread violation of environmental and other laws and regulations.

On April 27 last year, then Environment Secretary Regina Lopez found eight employees of the DENR office in Western Visayas guilty of administrative offenses related to irregularities in the issuance of homestead patents in Boracay.

The homestead patents, which are intended for agricultural lands, were issued by the DENR employees although most of the properties have been used for commercial and residential purposes, according to a department investigation.

Lopez ordered the dismissal of two employees for issuing homestead patents covering 31 lots with a total area of 9.75 hectares. She suspended two others for six months and another two for three months.

The decision has been under appeal and is pending in the office of Environment Secretary Roy Cimatu.

In September last year, the Ombudsman ordered the dismissal of Aklan’s provincial environment and natural resources officer and four other DENR employees for allegedly extorting P500,000 from a landowner in Malay.

A case filed against the operators of Crown Regency Resort and Convention Center for allegedly building on a wetland was dismissed due to technical grounds, sparking outrage from residents and other businessmen.

The Department of Tourism’s attached agency, Tourism Infrastructure and Enterprise Zone Authority (Tieza), is also being blamed for the delay in infrastructure projects intended to sustain the island’s environment.

For instance, the drainage system that Tieza started in 2007 is still unfinished.

Swiss-German Ralph Gasser, who has been living on the island since 1983, said that while he welcomed efforts of the DENR and other government agencies to rehabilitate Boracay, he lamented that the problems had become serious because of years of government neglect.

“This is overdue and should have happened a long time ago,” Gasser told the Inquirer. “Where has the DENR been for the past 25 years? Why didn’t they step in earlier?”

Ming wonders whether the problems will really be solved.

“Everybody is probably pointing fingers at the other person. But there has got to be a systematic way to preserve the island,” she said.

“I am resigned to the fact that people want to be on a beautiful island, but people just need to take responsibility for cleaning it up,” she added.

Read Next
Palace asks for details of Boracay closure in phases
EDITORS' PICK
vivo brings to the Philippines a powerful smartphone with a slimmer body, the vivo Y02s for only PHP 6,499
Palace: Biggest supermarkets in PH commit to sell sugar at P70 per kilo
What to watch out for when selecting a video surveillance solution
Heads may roll at BOC, says Palace if sugar smugglers are allowed to use recycled import permits
House energy committee chair Arroyo bats for cheap electricity
DOH reports increase in daily COVID-19 deaths, mostly unvaxxed
MOST READ
Brian Poe-Llamanzares receives his PhD in Public Administration
Alyssa Valdez to miss Creamline’s AVC Cup campaign
Metro Manila’s No. 1 wanted man arrested, says NCRPO
Rhian Ramos on new beau Sam Verzosa
Don't miss out on the latest news and information.