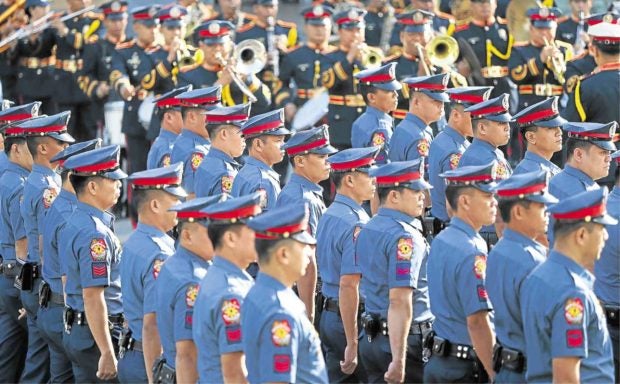 The adoption of military ranks for police officers is expected to “promote a common understanding” with the AFP. (File photo by EDWIN BACASMAS / Philippine Daily Inquirer)

It was President Rodrigo Duterte himself who suggested that the rank classification of the Philippine National Police (PNP) uniformed personnel be changed, adopting that of the military establishment’s for easier recall, said Director General Ronald de la Rosa, PNP chief, said on Monday.

([You know what triggered that? It was what the President said that he has been dealing with the PNP ever since. He had been a mayor for how many years but up to he could not internalize what is the equivalent of colonel, one-star general, two-star general. So he said, change it. I told him, “Sir, we have long wanted to change it.”]

Dela Rosa also took note that even journalists covering the police beat would sometimes mix up the ranks and say “Police Senior Officer” instead of “Senior Police Officer.”

Dela Rosa expressed support for House Bill No. 5236, which seeks to change the PNP’s rank classification and adopt the one used by the Armed Forces of the Philippines (AFP).

The measure will amend Section 28 of the Department of Interior and Local Government Act of 1990 (Republic Act No. 6975) “for purposes of clarity of command and responsibility, and for the effective and efficient administration, supervision and control.”

The PNP rank will be set apart from that of the military’s by adding “police” before every rank.

For example, a Director, which is Dela Rosa’s rank, would be police General (four-star rank) and a Deputy Director General will be police Lieutenant General (three-star rank).