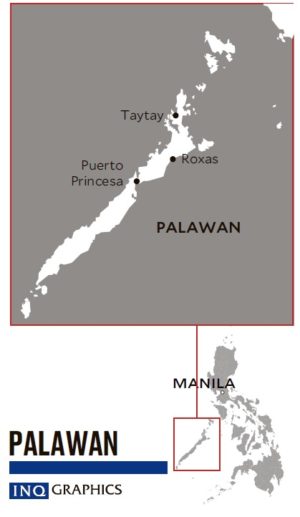 All three lawmakers from Palawan, the Philippines’ largest and westernmost province from which the country’s South China Sea claims are administered, have proposed to divide it into three separate provinces to “bring closer expanded services to areas not previously served.”

The municipality of Kalayaan, which covers the Philippine-claimed features in the resource-rich but hotly contested Spratly Islands in the South China Sea, would form part of Palawan del Sur.

Shares from the proceeds from the development and use of national wealth, including those gained from the Philippine’s maritime zone that is claimed by China, would be “divided equally” among the three provinces and “automatically released.”

The bill defines national wealth to include “all natural resources situated along the West Philippine Sea extending up to the limits of the exclusive economic zone (EEZ) or extended continental shelf.”

The Philippines’ 370-kilometer EEZ in the South China Sea is officially known as West Philippine Sea.

The share of the proposed provinces would be based on whichever of two formulas would yield the higher amount: 1 percent of the gross receipts from the preceding calendar year, or 40 percent of the taxes, royalties and charges that the pertinent government agencies and corporations would have paid if they were not exempted.

Besides that, the proposed provinces would “have a combined share of not less than 40 percent of the gross collection derived by the national government” from mining taxes, royalties, forestry and fishery charges, and administrative charges. This would be on top of the internal revenue allotment.

According to the explanatory note, Palawan, whose oil and natural gas reserves account for 45 percent of Luzon’s electricity supply, has been hard-pressed to deliver basic services due to its sheer size—14,896.55 square kilometers. Its length from north to south is 500 km.

Under the bill, the northern and eastern areas currently covered by Palawan’s first district, represented by Alvarez, would be split into two provinces with one representative each to the House of Representatives.

Palawan Oriental would comprise Roxas as the capital, as well as the mainland towns of San Vicente, Dumaran and Araceli, and the far-flung island municipalities of Agutaya, Cuyo, Magsaysay and Cagayancillo (which includes Tubbataha Reefs Natural Park).

The remote municipalities south and west of Puerto Princesa City (which is actually an independent city even though it is currently the provincial capital), would be part of Palawan del Sur.

Palawan del Sur would comprise Brooke’s Point as the capital, as well as the municipalities of Aborlan, Narra, Quezon, Sofronio Española, Rizal, Bataraza, Balabac and Kalayaan.

Except for Aborlan, these municipalities are currently part of the second district represented by Abueg.

2nd district to be enlarged

The bill would actually enlarge the current second district, because Aborlan, a municipality currently within Acosta’s third district, would be transferred.

The third district would become the slightly smaller but stand-alone district of the highly urbanized city of Puerto Princesa, which would not be a capital or part of any of the three proposed provinces.

The first elections for the new provincial government officials and the representatives of the reformed districts would be on May 9, 2022.

Besides this measure, two other pending bills (HB 5040 and HB 5185) have been filed in the 17th Congress to create the provinces of Zamboanga Hermosa and Maguindanao North in Mindanao.