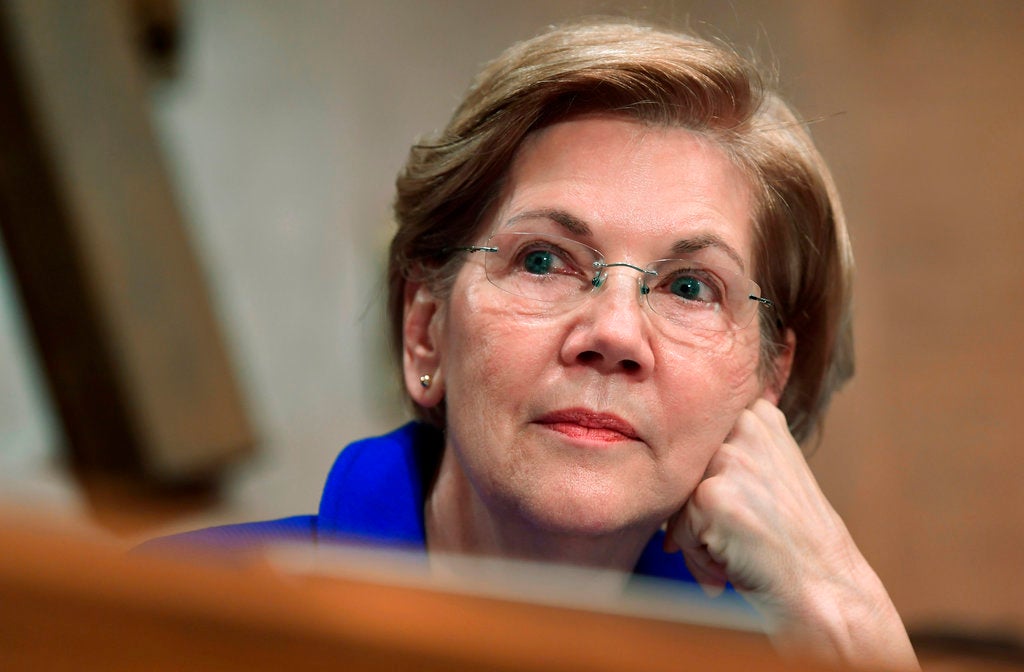 In this file photo, Sen. Elizabeth Warren, D-Mass., waits to speak during a meeting of the Senate Banking Committee on Capitol Hill in Washington. (AP Photo/Susan Walsh, File)

BEIJING — U.S. Sen. Elizabeth Warren says chaos in the Trump administration is harming its ability to formulate coherent policy toward North Korea’s nuclear program and other important issues in Asia.

Vacancies in the foreign service are undermining Washington’s ability to advance U.S interests, Warren told reporters in Beijing on Saturday.

U.S. allies, while still supportive, are “searching for information” about U.S. intentions in Asia, the Massachusets Democrat said.

“This has been a chaotic foreign policy in the region, and that makes it hard to keep the allies that we need to accomplish our objectives closely stitched-in,” Warren said.

Warren also visited South Korea and Japan during her trip to Asia.

She said President Donald Trump’s agreement to meet with North Korean leader Kim Jong Un was “rash,” in the absence of Pyongyang’s commitment to take “any steps at all to indicate that they were serious about denuclearization.”

On China, Warren said the U.S. needs to acknowledge Beijing’s growing power and influence and continue to emphasize the importance of human rights within the relationship.

“I understand that our relationship with China is complex,” Warren said. “There are areas where we have mutual interests and where we will work together to try to accomplish our shared goals. But there are also areas where we are vigorous competitors and do not have shared interests.”

Warren said the idea that China would more smoothly integrate with the rest of the world based on its economic growth and open markets “has been proven wrong.”

“And the United States is now trying to recalibrate that relationship,” she said.

China’s massive surveillance system, including its control over information on smartphones and the internet, has helped it to “close off” the country, she said.

“We told ourselves a happy-faced story that never fit with the facts, and now … the United States cannot avoid facing a very different reality with China,” Warren said.

Warren’s visit to Northeast Asia follows the abrupt firing of Rex Tillerson as U.S. secretary of state and the Trump administration’s continued failure to fill many crucial positions.

Tillerson lost the support of many of the State Department’s 75,000 workers over his moves to cut the budget, leave key leadership positions vacant and downplay human rights and democracy promotion as diplomatic priorities.

Warren said “consistent efforts to take the legs out of our diplomatic corps” by understaffing the service stands to undermine America’s foreign policy efforts.

“That’s someone whose information, whose thoughts, whose analysis doesn’t get put into the mix,” she said.

Warren said that there could be no military solution to the dispute with North Korea and that she has been told that “it will take strong economic and diplomatic efforts” to reduce the threat posed by Pyongyang.

Warren didn’t disclose details of her discussions with Beijing officials, including key economic adviser Liu He, but said “the Chinese have not deviated from their talking points.”

Read Next
Some US states press ahead on climate change goals, despite Trump
EDITORS' PICK
Cebu City closes its borders
BREAKING: 1,075 people in PH has coronavirus disease – DOH
Style and music journeys with Claudia Barretto
DILG to stranded workers: ‘Stay where you are’ until Luzon-wide quarantine is over
UP-PGH wards for COVID-19 patients finished in 5 days
IATF: Food firms to operate with 50% of workforce during Luzon quarantine
MOST READ
Pacquiao to seek probe on leaked private letter from Barangay Dasmariñas
Tootsy Angara bares neighbor wanted them out of village
McCoy bares devastating effect of failed romance with Elisse
What awaits medical volunteers in DOH drive vs coronavirus
Don't miss out on the latest news and information.