From nuns’ burial ground to cradle for native trees 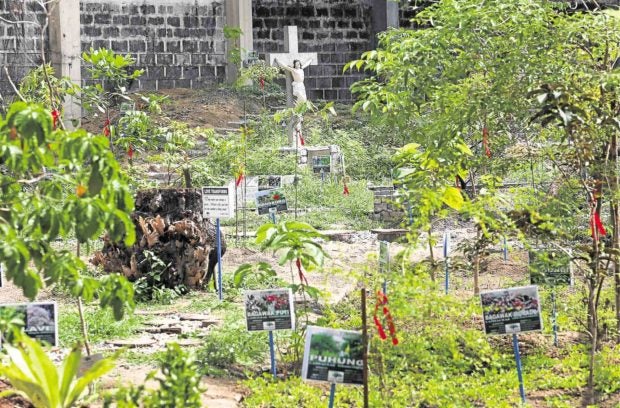 NEW LIFE Once a gravesite, the 1,000-square-meter lot on the College of the Holy Spirit Manila campus is now called Laudato Si Garden of Native Trees. —MARIANNE BERMUDEZ

What used to be the burial ground for missionary sisters of College of the Holy Spirit Manila (CHSM) in Mendiola has gained new life as Laudato Si Garden of Native Trees, which will soon be open to the public.

Laudato Si (“Praise Be To You”), is Pope Francis’ encyclical urging a timely response among the faithful to global warming and other disturbances to the Earth’s climate system.

The encyclical, which has the subtitle “On Care for our Common Home,”  has become the new bible for environmentalists, said Imelda Sarmiento of Hortica Filipina Foundation,  a group that advocates the cultivation of native tree species.

The garden of native trees is meant to save what remains of the country’s rich biodiversity, Sarmiento said, adding that the burden of preserving our once enviable flora lies heavily on urban gardeners who might find foreign tree species popular and exotic without knowing how invasive they could be and how they could displace native species.

As such, alien plant species can alter the existing habitat and harm the ecosystem.  If local wildlife cannot adapt to the new habitat conditions or aren’t able to move to a more suitable new habitat, they may not survive at all.

Sarmiento, once an advocate of tree planting around some parts of the Metro, eventually realized that our own soil had been invaded by alien trees since the 1900s, a dilemma brought by our colonial history.

“Americans were the ones who brought mahogany, a tropical hardwood species, here,” Sarmiento said. “Mt. Makiling is now 60 percent covered with mahogany to the detriment of our native species. Mahogany is very invasive,” she added.

Some self-proclaimed environmentalists are not aware of the risks, she said, adding that native trees offer natural food, medicine and habitat for wildlife like birds, bats, mammals, reptiles and insects.

Having adapted to local climate and their natural habitat’s type of soil, native plants are also easier to grow and have developed their own natural defenses against many pests and diseases, so they don’t need costly chemical fertilizers and pesticides to grow and thrive.

Trees in the garden are grouped according to their ecological status (critically endangered, endangered, vulnerable, threatened, not threatened or not assessed), as well as ecological class (indigenous or endemic to the Philippines).

Indigenous means the species’ presence in a given region is the result of only natural processes, with no human intervention. Native plants are those indigenous to a given area in geologic time.

Endemic refers to species that are unique to a defined geographic location, such as an island, nation or country.

In the Philippines, there are 3,600 species of native trees, 67 percent of which are endemic. That’s more than 5 percent of the world’s flora.

And yet the Plant Resources of Southeast Asia journal noted that the flora of the Philippines is probably the least known of any country in Southeast Asia.

During the blessing and soft opening of Laudato Si Garden on March 17, Sarmiento expressed doubt that most Filipinos would be able to name at least five native trees since most parks are planted with foreign tree species. Where are the yakal, agoho, apitong, bagtikan, banaba, bignay, lauan, pili and molave, among other native trees? she asked.

Sarmiento herself was enlightened by her botanist friends from the University of the Philippines (UP) on the difference between native and nonnative trees, she said, citing Filipino botanist Leonard Co, who was shot to death in 2010 while studying indigenous trees in the forests of Kananga, Leyte.

Laudato Si Garden hopes to remedy that lack of knowledge, said Camarillo of Batch ’65, as it encourages donors to plant or donate native trees. “[Their] names will be etched on steel plates and will be placed under their respective trees. Donors can dedicate the tree to a special person who has touched their lives in a profound way,” she added.

“The plan is to ‘green’ the whole place,  to plant more ferns and vines,  to complete the pergola at the entrance and to create vertical gardens to cover some of the walls—it is a work in progress,” Camarillo said.

Earlier, Sarmiento’s Hortica Filipina Foundation, in partnership with UP, Zuellig Group and other organizations, started this different tree-planting drive when it set up in 2013 the Washington Sycip Garden of Native Trees. The 4,700-square-meter botanical landmark, located between the University Theater and UP Film Center at the UP Diliman campus, is home to over 100 different species of young native trees from all over the Philippines.

The advocates’ persistence has also influenced public policy. In 2014, the Quezon City Council passed the “Native Re-Greening Ordinance” that mandates all villages in Quezon City to include in their environmental programs and projects the planting of native trees in their respective territorial jurisdiction.

But beyond increasing the visibility of our local species, Sarmiento noted the importance of civil society in storifying the memories of native trees so that ordinary Filipinos could find them relevant to their lives and practice stewardship over them.

“In the end, you can only conserve what you love, love what you know and know what you’ve been told,” Sarmiento said.