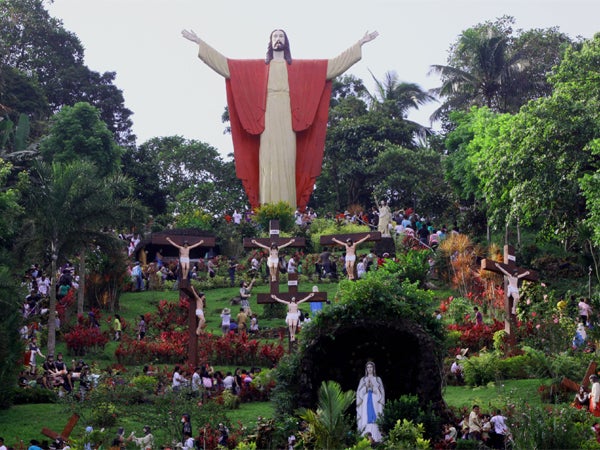 Throng of devotees flock to the Kamay ni Hesus Shrine in Lucban, Quezon on Good Friday in April 2012 to climb the spiritually sanctifying 300-step “Stairway to Heaven” to reach the 50-foot statue of the resurrected Christ on top of the hill. (File photo by DELFIN T. MALLARI JR. / Inquirer Southern Luzon)

From Palm Sunday to Good Friday, the throngs of pilgrims to the five-hectare religious complex located in Barangay Tinamnan at the base of the mystic Mount Banahaw, reached more than three million, according to Fr. Joey Faller, the popular “healing” priest and administrator of the shrine.

“That’s the estimate of the staff tasked to count the incoming visitors at the gate. And it could reach more than that if we will count the arrivals of more pilgrims and tourists until Easter Sunday,” Faller said over the phone on Saturday.

Faller said the gate has been installed with an automatic counter.

“But the counter is only accurate if the visitor will come in one by one. But if it’s in simultaneous rows, it is not reliable,” he said.

In a text message to the Inquirer on Saturday, Faller said the machine counter had already registered a total of 2.2 million.

“With a margin of error of around one million, it is safe to say that our visitors have already reached 3.2 million,” he said.

Counting the estimated additional number of visitors that will arrive tomorrow (Easter Sunday), Faller believes that around 3.8 million visited the shrine this year.

Faller attributed the rising number of shrine visitors every year to reports from mainstream and social media and the latest avenue, his daily “altanghap” period which was being beamed live on his own Facebook page.

The “altanghap” – which is a combination of the words almusal (breakfast), tanghalian (lunch), and hapunan (dinner) – was Faller’s daily teaching based on the day’s Gospel.

He explained that the concept of “altanghap” was universal.

“Though it, I can reach the faithful anytime. Whether it is in the morning, lunchtime or nighttime in any place of the world,” he said.

“There were nonstop arrivals of people at the shrine especially on Good Friday. My men had a hard time managing the floods of pilgrims and tourists plus the long lines of arriving vehicles,” Onquit said in a phone interview.

But despite the huge number of out-of-towners, no major crime incidents were recorded, according to the police chief.

“Not one incident of pickpocket was reported. Only one vehicular accident was recorded,” Onquit said.

He attributed the almost zero-crime incident to the effective massive public safety measures information campaign that the police, local government and religious sector had launched several days before the Holy Week.

Faller noted noticeable dramatic changes among the throngs of shrine devotees this year.

“Most of them are youngsters. I’ve talked to some of them and they admitted that they want something different. They called their observance of Good Friday here as sort of sacred ‘spiritual gimmick’,” Faller said.

“The energy of their new-found spiritual high and their surprising discipline were in all corners of the shrine,” Faller said, noting the dramatic absence of scattered trash around the place.

“The absence of garbage which was usually thrown by the shrine visitors here and there were surprising,” said Faller.

Marites Nuval, 45, was feeling triumphant after she touched the base of the 50-foot concrete icon of the Risen Christ at the summit of the hill after a tiring 310-concrete steps climb.

Nuval, who was born without a right leg, climbed the “Stairway to Heaven” for almost one hour with the use of an aluminum crutch. She was guided by her sister and two other relatives during the painstaking climb.

Nuval said climbing the popular hill at the shrine has long been her dream.

“I only saw the scene in photos. Now, I finally reached it,” she said.

She vowed to return to the shrine and climb again. She said she will bring her three children the next time.

“I offered the climb for them, that they become successful in their lives,” said the single mother.

Faller said Nuval’s experience at the top of the hill was also felt by legions of devotees after touching the base of the Risen Christ statue.

“No one can explain the special feeling but only the devotes themselves,” he said.

Guards and volunteers arranged the climb in batches to prevent overcrowding on the hill.

The multitude of devotees is expected to come in buses, cars, jeeps and motorcycles to mark the Holy Week at the shrine which Faller once described as an “avalanche of faith and devotion.”

“Lots have been healed here. Lots have found peace and contentment here,” said Faller, who pilgrims believe possesses a gift from God for curing the sick.

To ensure the safety of devotees, Faller said experts conduct a periodic assessment on the structural integrity of the huge concrete icon of the Risen Christ atop the colossal Via Dolorosa with monumental Stations of the Cross strategically spread out along the pathways with the grotto of the Virgin Mary at the center. /atm