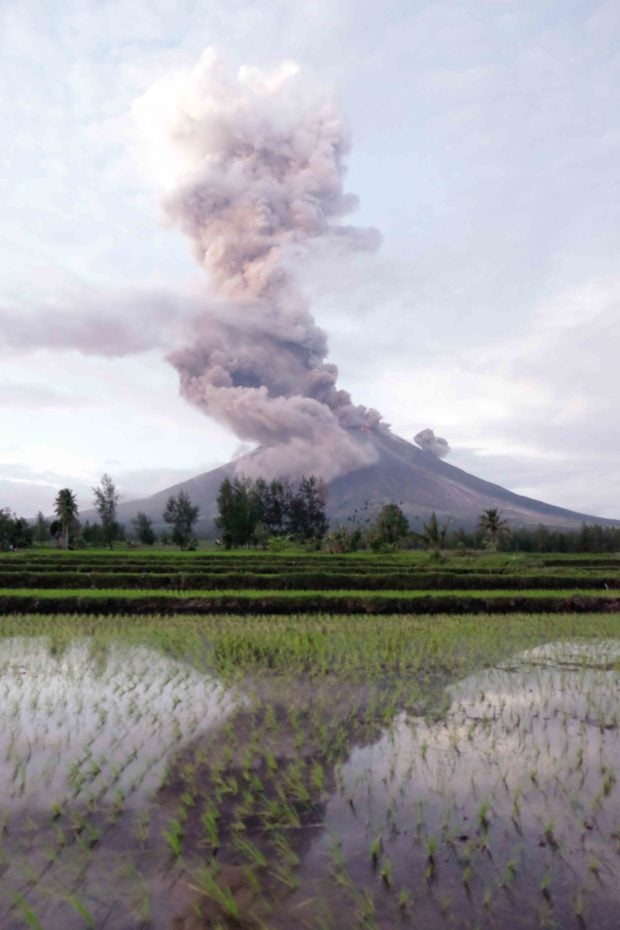 This photo, taken on Jan. 27, 2018, shows Mouint Mayon spewing ash and pyroclastic materials is reflected on a farm in the village of Busay in Daraga town, Albay province. (Photo by NIÑO JESUS ORBETA / Philippine Daily Inquirer)

LEGAZPI CITY — The Philippine Institute of Volcanology and Seismology (Phivolcs) may soon lower the alert level at Mount Mayon from three (decreased tendency towards hazardous eruption) to two (moderate unrest).

Mariton V. Bornas, head of the Volcano Monitoring and Eruption Prediction of Phivolcs, said they were just waiting for the end of the geodetic survey this week to confirm their results with real-time geodetic networks.

She said Mayon’s parameters continued in a downward trend.

“Its seismicity is now low, its edifice is now deflating, and the sulfur dioxide concentration of the plume is going down,” Bornas told the Inquirer through a text message.

A volcano’s seismicity is measured by the number of earthquakes recorded, while deflation of the edifice means that the volcano’s supply of magma has already decreased.

According to the latest Phivolcs bulletin released 8 a.m. Wednesday, Mayon’s activity “was characterized by general quiescence.”

As of Wednesday, there were still 1,300 families, or 5,016 persons, living in nine evacuation centers in Camalig, Guinobatan, Malilipot, and Tabaco City.

They are still waiting for a decampment order from government authorities before they could go home.

On March 6, Phivolcs lowered its alert level to three, after it noted a general decline in eruptive activity on the volcano.

He said the messages sent by the NDRRMC should be up to date, accurate and specific.

According to him, Phivolcs is the legitimate agency, which has full authority in releasing announcements or advisories.

“I already called the attention of Usec Renato Solidum and told him that he should talk with NDRRMC. It seems the agency is not coordinating with Phivolcs, since it is the expert when it comes to volcanic activities,” he said.

Solidum is the director of Phivolcs.

But the last text alert sent by the NDRRMC stated that Mayon had another eruption.

Bichara said that tourism in the province had been affected because of this, citing some national conventions being canceled for fear of an eruption.

Bichara assured the public that it was safe to travel to Albay. /atm