Only 41% of Catholics go to church weekly – SWS 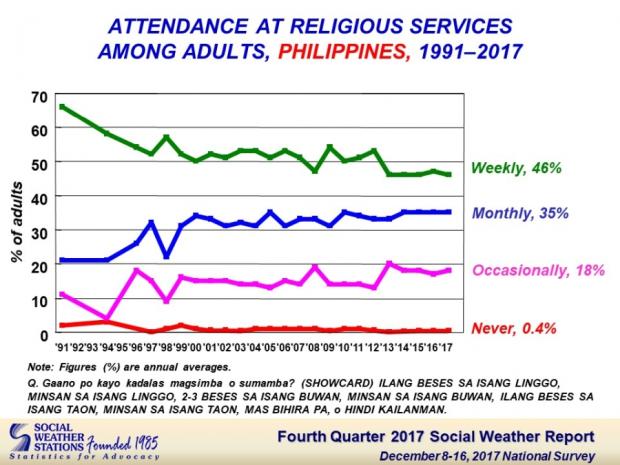 About 46 percent of Filipino adults, whatever their religion, attend religious services at least once a week, a Social Weather Stations (SWS) poll taken in the last quarter of 2017 showed.

On the other hand, only 41 percent of Catholics attend religious services weekly.

And yet about 81.4 percent of Filipinos are Catholic, according to 2015 figures from Pew Research Center.

“The proportion of those who attend religious services monthly was highest among Catholics at 38 percent followed by Iglesia Ni Cristo at 28 percent, Other Christians at 18 percent, and Muslims at 2 percent,” it added.

The SWS noted that in 72 SWS surveys on church attendance from 1991 to 2017, “weekly attendance at religious services has aways been lower among Catholics, compared to adult Filipinos in general.”

“The 24-point decline in Catholics’ weekly church attendance from 1991 to 2017 is highly significant, statistically speaking,” it noted.

The survey firm also found that more Filipinos who were “very happy” with their lives saw religion as “very important.”

The survey was conducted using face-to-face interviews of 1,200 adults, aged 18 years old and above, nationwide. It has a margin of error of ±3% nationwide, ±4% for Luzon, and ±6% each for Metro Manila, Visayas and Mindanao, the SWS said. /atm