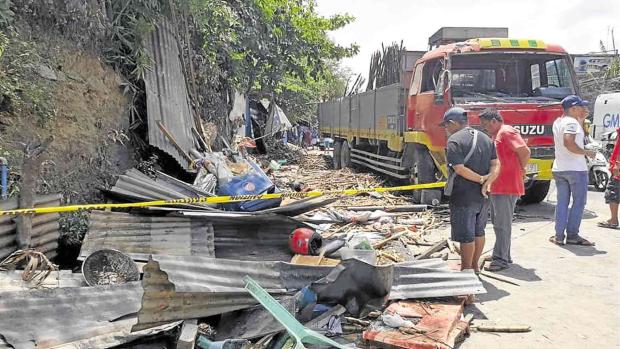 A roadside eatery in Taal, Batangas, is reduced into a pile of debris after a truck loaded with sugarcane smashed it on Holy Wednesday. Seven people died in the crash. CONTRIBUTED PHOTO

BATANGAS CITY — Seven people were killed, while four others were hurt when a parked 10-wheel truck, loaded with sugarcane stalks, was hit by another truck, causing it to skid and hit a roadside eatery in Taal town, Batangas province, on Wednesday, police said.

Most of the victims were having breakfast at MJ Eatery in Barangay Carsuche, where the truck crashed at 6 a.m.

She said the impact caused the second truck to skid and smash the eatery. The truck also damaged five other vehicles, including two cars and a van parked nearby.

It was unclear whether the sugarcane trucks were traveling together, as both drivers had escaped after the crash.

Rowena Almazan, municipal disaster risk reduction and management officer of Taal, said most of the victims died after being pinned under the second truck.

“[The road] was not even downhill. It was right after a curve, but it was straight and flat,” Almazan said.

In Cavite province, 10 people were hurt when a bus hit a passenger jeepney in Tagaytay City, also on Wednesday.

Supt. Elmer Decena, Tagaytay city police chief, said the vehicles came from Nasugbu town in Batangas when the jeepney, which was traveling ahead of the bus, stopped abruptly to allow a passenger to alight. The bus then hit the jeepney’s rear.  /muf /pdi