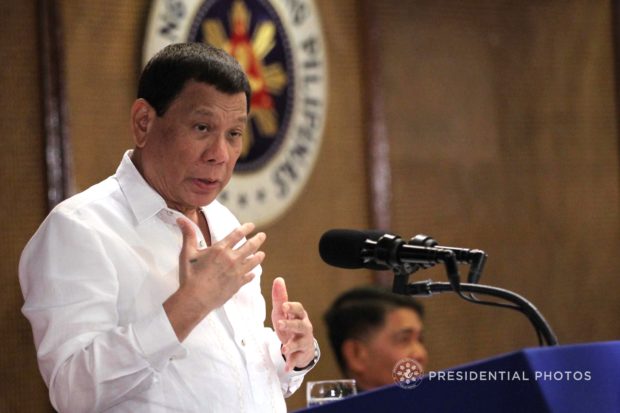 President Rodrigo Roa Duterte speaks during the ‘merienda’ he hosted for the rebel returnees at the Malacañang Palace on February 21, 2018. Presidential Spokesperson Harry Roque praised Duterte for his decisive leadership, political will and compassion on Wednesday, March 28, 2018, which marked the President’s 73rd birthday. ACE MORANDANTE/PRESIDENTIAL PHOTO

“Just like in previous years, he has chosen to spend this special day quietly with his family and loved ones in Davao City,” Presidential Spokesperson Harry Roque said in statement on Wednesday.

In his birthday message, Roque praised Duterte for his political will in steering the country towards progress.

“On this day, we are reminded of how blessed we are as a nation to be headed by someone who is known for his strong political will, decisive leadership and compassion for his fellowmen.  I join the people in wishing our President a happy birthday!” he said.

Roque, who became the President’s spokesperson in November last year, said it was his “distinct privilege” to work with Duterte and seeing “firsthand his hard work and dedication in fulfilling his goal of building a nation where opportunities abound and where citizens are empowered to realize their aspirations.”

“For many years, Mr. Duterte has inspired many officials in government – myself included – to do better in serving the public.  His sense of duty and fidelity to the country motivate us to work even harder to spread his message of genuine and meaningful change to our people,“ he said.

Roque said he wished Duterte a healthy life as he coninued to serve the Philippines.

“We pray that he will be blessed with more healthy years ahead so he may continue to guide our people to unity and prosperity,” he said.

“A grateful people celebrate his seventy-third year and pray that he be blessed for more,” Andanar said.

“We pause for this one day, to render to the President, Rodrigo Roa Duterte, the honor and the gratitude deserving of a leader, whose vision is revealed as each day unfolds. He acts both from the realm of power, and from the homes of the powerless. The narratives of his stories, belong authentically to the language of the people,” he added. /cbb