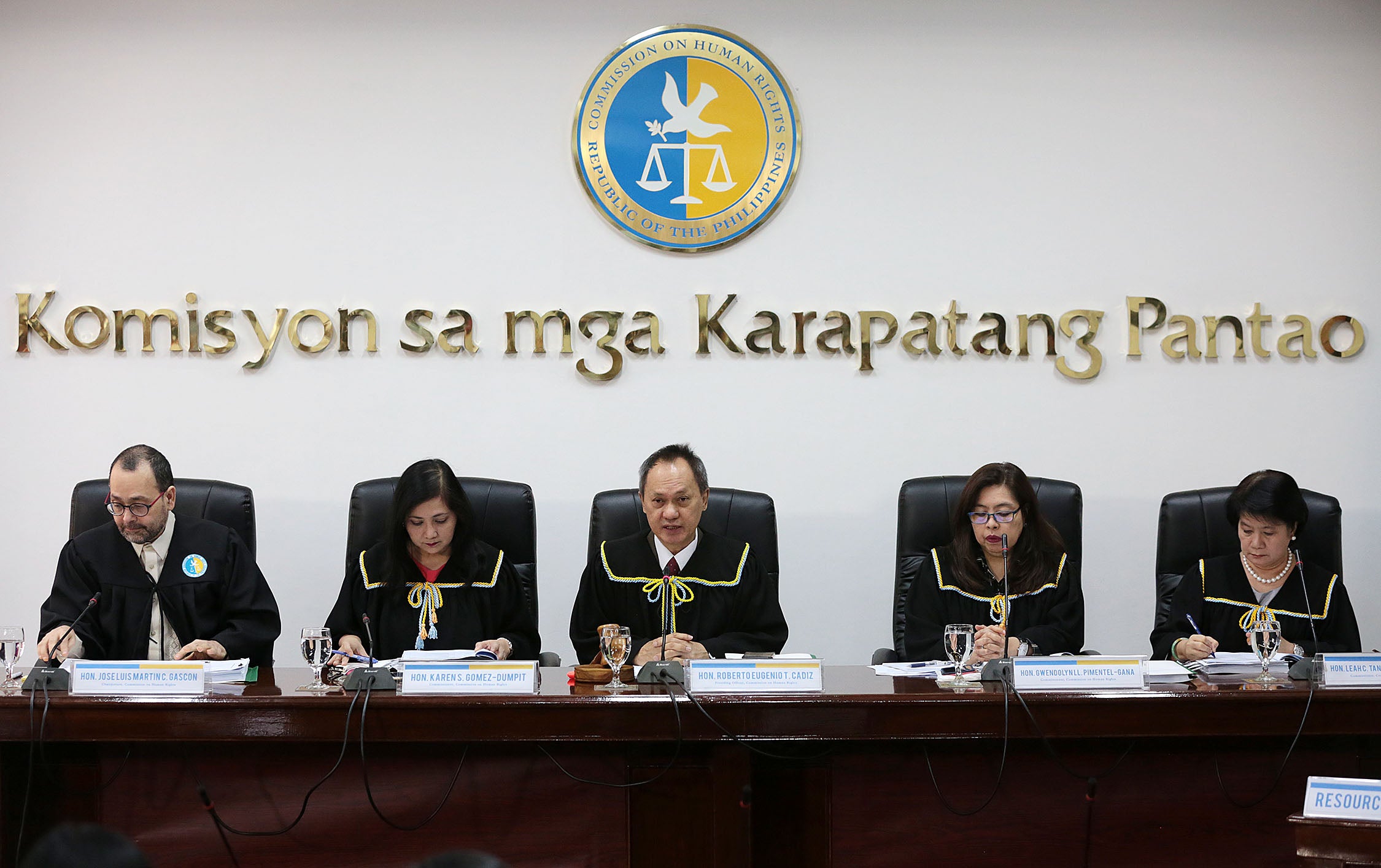 Human rights commissioners at the start of the hearing on a petition linking rights violations with climate change. —GRIC C. MONTEGRANDE

The Commission on Human Rights (CHR) official heading the world’s first inquiry on the link between climate change and human rights urged “carbon majors,” or companies being blamed for global warming, to participate in the ongoing inquiry.

On Tuesday, the CHR started hearing the petition asking it to probe possible human rights violations committed by 47 fossil
fuel firms for their alleged roles in climate change and its destructive effects on communities.

Petitioners alleged that carbon major firms, being major greenhouse gas contributors, also violated the rights of people displaced by the destructive effects of storms believed to be climate change-induced.

At the hearing on Tuesday, fossil fuel firms sent representatives as observers but none registered formal participation.

CHR Chair Jose Luis Martin “Chito” C. Gascon said at the start of the hearing that the agency “can no longer ignore the impact of significant changes in global temperatures and rising sea levels on people’s lives.”

Amalie Obusan, Philippine country director of Greenpeace Southeast Asia, told the CHR in her testimony that “basic rights to food, water, shelter, health and even life are under threat from climate change.”

Fossil fuel firms, she said, “hold the lion’s share of responsibility for climate change and the harm it creates.”

“They can and must be held accountable,” Obusan said.

CHR Commissioner Roberto Eugenio Cadiz, in an interview after the hearing, urged fossil fuel companies to join the proceedings.

Cadiz said the inquiry was not about finding guilt and the companies won’t be asked to pay damages.

The probe, he said, sought to determine if climate change had an impact on the human rights of Filipinos.

Assuming that carbon majors had a role in climate change, they would need to “mitigate or lessen it,” Cadiz said.

Read Next
AFP: No order for truce yet
EDITORS' PICK
Get exciting deals and discounts when you download the new McDonald’s App
In appreciation: Kobe Bryant, a life defined by hard work
DOH warns vs eating raw meat, exotic animals amid coronavirus outbreak
SM continues to send relief assistance to remote towns in Batangas
‘House of Kobe’ launched in Valenzuela City hours before hoops star’s death
4 Ways Jollibee’s new store will serve a leveled-up kind of joy to Filipinos in the South
MOST READ
College baseball coach, wife and daughter die in crash that killed Kobe
3 Chinese admitted to San Lazaro Hospital after showing signs of flu
Lack of witnesses prompts Makati Court to reset Trillanes’ rebellion trial anew
Kobe Bryant’s helicopter flew in fog that grounded other choppers
Don't miss out on the latest news and information.