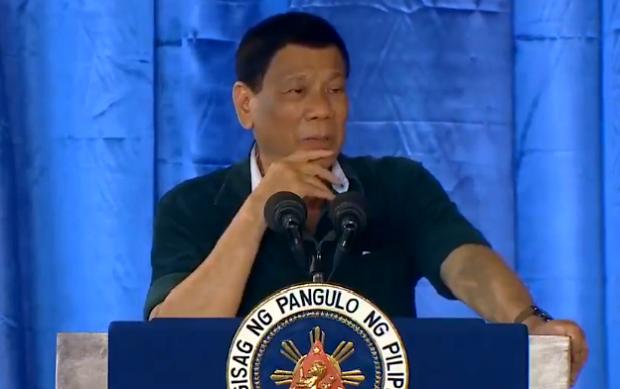 President Rodrigo Duterte delivered a speech during the presentation of firearms handed over by members of the Abu Sayyaf Group who surrendered at the Capitol Site in Patikul, Sulu on Monday, March 26, 2018. (Presidential Photographers Division)

“I am worried. Would it do well to mix it all in one pot? Meaning to say, are you Joloanos ready to be led by a Maranao?” the President said on Monday in a speech in Patikul, Jolo.

The BTC crafted the BBL, which was among proposed laws now pending in Congress seeking to establish a new Bangsamoro entity in lieu of the Autonomous Region in Muslim Mindanao (ARMM).

“That’s the problem now while the BBL is being processed in Congress. When the time comes, who heads what? Are we going separate ways or can we put a single governing authorities and who would it be?” he asked Tausugs during his Sulu visit.

The President said there were not many problems between the Maranaos, Maguindanaons and Iranuns (residents of border areas of Maguindanao and Lanao del Sur) because their languages are more or less the same.

“But here and in Davao, we have Kagan, Sama, Tausug [who speak differently]. Would it also be good? Whether we do it by the regions of the tribe or a separate governing authority, I have to fathom it,” he added.

The other details of the meeting were not announced.

Jaafar told the Inquirer he could not discuss the details of the meeting either but admitted that Duterte mentioned what he said in Sulu “in passing.”

“But generally, it was about how to speed up the passage of the BBL,” Jaafar told the Inquirer in a phone interview.

“I am not at liberty to discuss everything,” he added. /atm