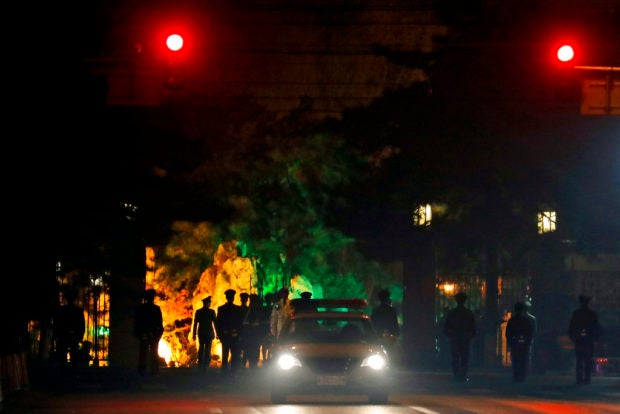 A military honor guard is seen marching away after a convoy of vehicles enter the the Diaoyutai State Guesthouse where top North Korean leaders have been known to stay on previous trips to Beijing, China, Monday, March 26, 2018. Japanese media reports said a special North Korean train arrived in Beijing under unusually heavy security on Monday, suggesting a senior delegation might have been aboard. (AP Photo/Ng Han Guan)

BEIJING  — The arrival of a special train in Beijing and unusually heavy security at a guesthouse where prominent North Koreans have stayed in the past have raised speculation that Kim Jong Un is making his first trip to China as the North’s leader.

Kim has summits planned with South Korean President Moon Jae-in in late April and with President Donald Trump by May. While there has been no word of a similar meeting with Chinese leaders, China has been one of North Korea’s most important allies even though relations have recently chilled because of Kim’s development of nuclear weapons and long-range missiles.

A vehicle convoy entered the Diaoyutai State Guesthouse in Beijing on Monday evening and a military honor guard and heavy security were seen later. That followed reports from Japanese network NTV and public broadcaster NHK of a special North Korean train arriving in Beijing under unusually heavy security.

A spokeswoman for the Chinese Foreign Ministry said she was not aware of the situation and had no further comment. North Korea’s state-run media had no reports of a delegation traveling to China.

NTV reported the green and yellow train appeared very similar to the one that former North Korean leader Kim Jong Il, Kim Jong Un’s late father, took to Beijing in 2011 and has 21 cars.

A video that aired on NTV also showed a motorcade of black limousines waiting at the train station and rows of Chinese soldiers marching on what appeared to be a train platform. The video did not show anyone getting off the train.

Shah reiterated Trump’s plans to meet with Kim, saying the U.S.-led international pressure campaign against Pyongyang “has paid dividends and has brought the North Koreans to the table.”   /muf