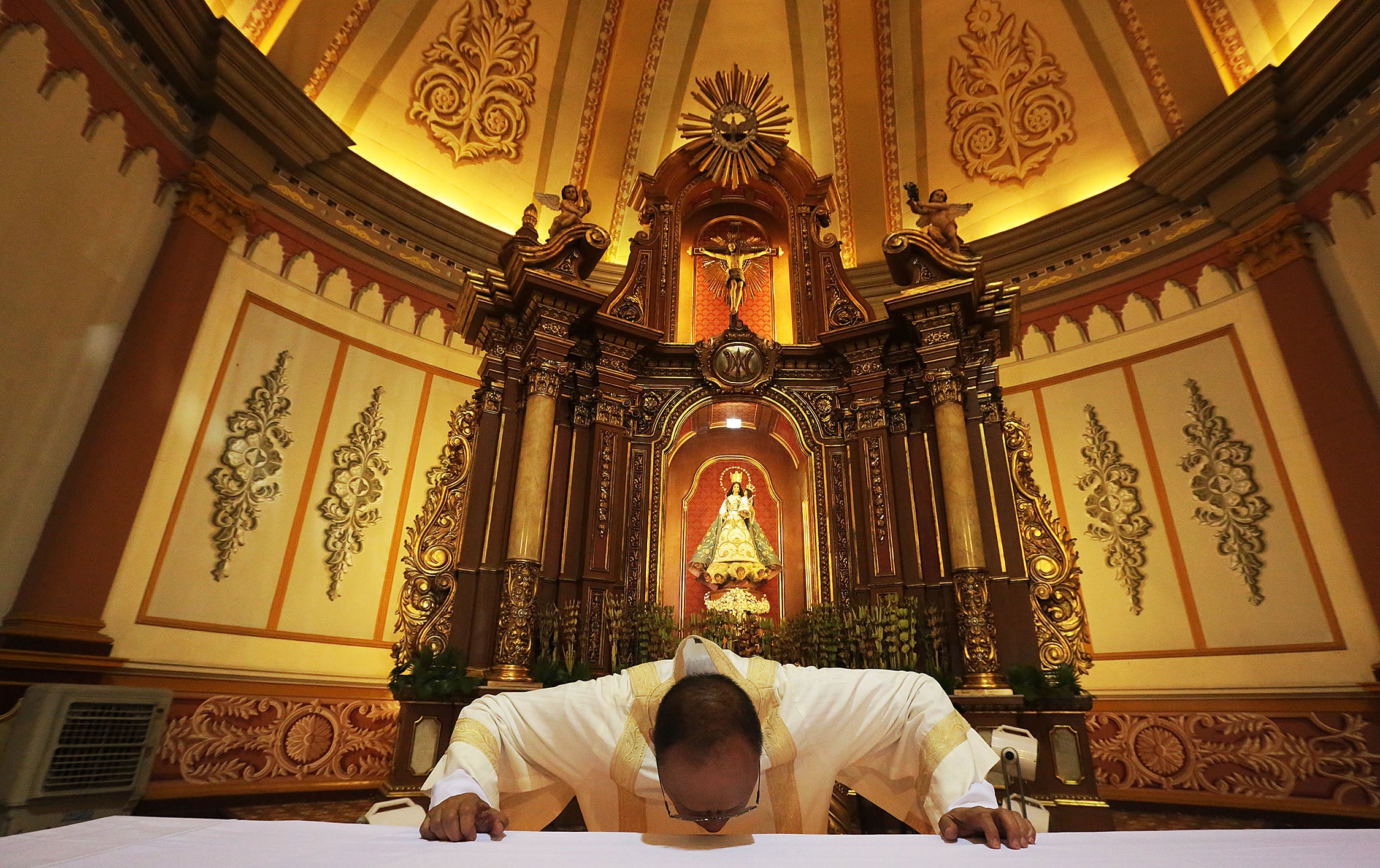 FULFILLMENT OF VOCATION Rev. Lambert Ramos kisses the altar of Our Lady of the Abandoned Church in Marikina City as he prepares to realize his vocation, which he hopes to attain through the grace of God. —GRIG C. MONTEGRANDE

Unlike most of his peers who are already retired and relaxing in their golden years, Lamberto Ramos, 66, will begin a new life in June — as a newly ordained priest.

It took him four decades to fulfill his vocation, but the topnotch marketing executive said it had always been burning deep in his heart since he was a 10-year-old altar boy.

His wife’s death due to colon cancer in October 2009, however, became the spur — as well as God’s grace — that set him on the path that made him a deacon in December last year.

His name is familiar in business circles, as he spent much of his career at key positions in such companies as Nextel, James Hardie, Alaska, Cleanway Technology Corp. and Learnix Global Philippines.

But before becoming president and manager, Ramos — now addressed as Reverend Lambert — spent his younger years in a seminary as a candidate for the priesthood.

He was born on Sept. 19, 1951, in Malolos, Bulacan province. He was still in high school when he entered Immaculate Conception Minor Seminary in Guiguinto.

On the advice of his spiritual director, he went on regency and taught philosophy at the College of the Holy Spirit, where he met his future wife, Maria Vilma de Guzman, who was his student there.

He courted De Guzman, who was a year older than he, after she graduated from college in 1973. They married in 1975 and went on to have three children: Johann, Carlo Miguel and Ana Kristina.

Ramos eventually moved to the corporate world to support his family. His wife stayed at home to raise their children—“even though she was very capable with her banking and finance degree,” Ramos said.

Though working as a manager at various companies, Ramos found the time to earn postgraduate degrees in marketing management, business economics and philosophy.

At home, he had a happy life with his wife, who was a devout Catholic. They heard Mass on Sundays and eventually every day.

The Ramoses joined the Roman Catholic movement, Couples for Christ, in 1988.

Their happiness was marred in 2007 when Vilma was diagnosed with colon cancer.

At the time, Ramos was being eyed as a commissioner of the Philippine Basketball Association. But he bowed out to care for his wife.

“Looking back, 2007 to 2009 were the most difficult years of my life. Cancer is not only devastating for the sick person, but it’s also difficult on the people around the person,” Ramos recalled.

Using everything he had, Ramos took his wife to chemotherapy and radiation treatments—until her death. They had been married for 34 years.

Three days before her death, he took her to Medical City. She was then already too weak to open her eyes and speak. 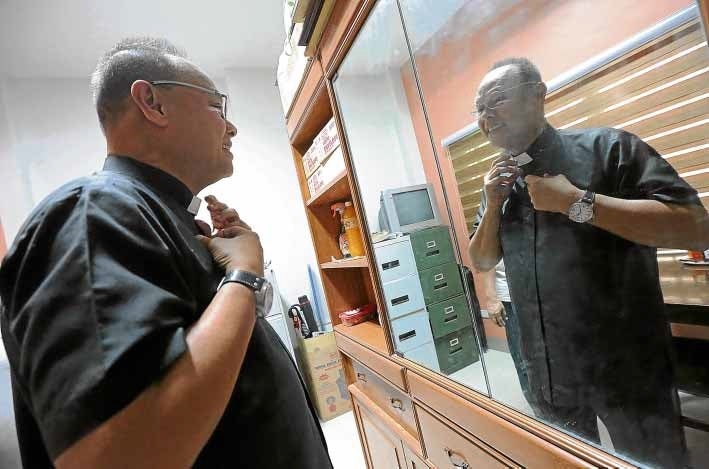 REBORN Rev. Lambert Ramos, a widower and retired marketing executive, gets ready for a pictorial at Our Lady of the Abandoned Church in Marikina City. He looks forward to his ordination on June 1. —GRIG C. MONTEGRANDE

He recalled affirming his love for her, and seeking her forgiveness that he had been unable to give her all the wealth that he had promised her.

“She drew on some kind of strength and opened her eyes and said, ‘Lambert, you may want to consider this. You become a priest, that’s all the wealth that I wish,’” Ramos said.

Back then, he didn’t take his wife’s words seriously, and he even became antisocial for two years after her death.

Later, however, he entered into a relationship with a woman. The relationship was brief, as he knew that no one could ever fill the gap in his life left by the death of his wife.

Then, slowly, he felt being led by God’s grace back to his life before he met his wife. And in 2014, he found himself knocking on the door of Loyola School of Theology, a stone’s throw away from his old house at Loyola Grand Villas in Quezon City.

He finished his diplomate in theological studies two years later, and waited for a diocese to accept him. He was ordained deacon in December last year, and is scheduled to be ordained priest on June 1 this year.

“After many years of corporate work and business decisions, you’d want to do something that is not profit-driven. This is something you want to do for the love of it,” he said.

Ramos consistently attributes his return to the path of the priesthood to God’s grace alone.

“When one becomes a priest, one becomes the person who translates to ordinary people the mystery of the coming of Jesus Christ, daily, in their lives,” he said.

His age did not hinder him from participating in his classes at Loyola, where his classmates called him “Tito Lambert.”

Ramos found himself contributing to discussions on marriage, family and sexuality, drawing from his experience as husband and father.

“I was very open to the fact that I was a married man, and they welcomed it. During discussions on marriage and family, my classmates would say, ‘Ask Tito Lambert, he would know,’” he said.

Among the things about married life that he loves to share is that true love does not count the wrongs, and that it is patient and forgiving.

“I lived out the married life, with the best and worst circumstances. I saw kindness in the smallest things. Love does not count the wrongs. Prefer to count the good things, and be thankful,” he said.

His children were happy that he chose to become a priest after their mother’s death, and they cried during his ordination as deacon late last year.

“I think they welcomed it and were happy about my decision. Maybe for them, it was a fulfillment of the wish of their mother,” Ramos said.

He added: “My intention was for a marital life, but one of us passed away. That gave me time, and an opportunity to see if I could still be of service. I’ve always felt that the Holy Spirit is guiding me in all of these things.”

When he becomes a full-fledged priest on June 1, he still has nine years to serve in the Church. Priests are required to retire when they reach 75.

Ramos will be serving under Bishop Francisco de Leon of the Diocese of Antipolo. He, however, admitted that he may no longer have the strength and energy to serve as a parish priest.

“I hope to contribute in the efficient running of the diocese’s resources by drawing on my managerial experience. It will be purely recommendatory, of course, ” he said.

He added that he was more than ready to take on the vows of obedience, poverty and chastity, as he has already left most of his worldly possessions to his children and sold his house in Quezon City.

Ramos is excited for June 1 to arrive and see his children attend his ordination as priest.

He is optimistic that other men in a situation similar to his will consider the priesthood. But before doing so, he said, they should pray and meditate in order to discern what God truly wants for them.

“I’m 66 years old, I have nothing to prove. There should be no more selfish motives here, but only to serve for the greater glory of God,” he said.

Ramos is acutely aware that while other men his age are enjoying their retirement, he is about to embark on something new.

“The ways of God are different. Even today, I have yet to understand what brought this about … When I wake up in the morning, I have something solid to do because it is God’s work,” he said.