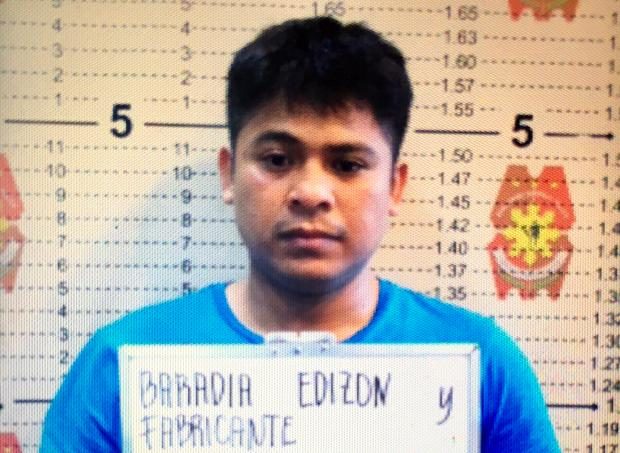 After barely escaping police officers in an hours-long chase last month, two of the men posing as agents of the Philippine Drug Enforcement Agency (PDEA) were arrested in Makati on Sunday.

Riding a motocrycle, Edizon Fabricante Baradia and his 17-year-old backrider were flagged down by police officers at a routine checkpoint (Oplan Sita) at the corner of Sampaguita and Cadena de Amor Streets in Barangay Pembo at 5:45 p.m.

The officers noted that they were not wearing helmets. Then they also noticed that the two men had guns tucked in the waist. Baradia had an improvised 9-mm revolver, while the minor had a Tanfoglio .45-caliber pistol, with serial number VO5809.

The officers arrested them and took them to Makati City Police Station.

While being booked for charges of illegal possesion of firearms and ammunition, investigators found out that Baradia and the minor were two of the fake PDEA agents caught on security cameras in Barangay Ususan in Taguig in February.

According to Senior Supt. Gerardo Umayao, Makati police chief, the identities of the suspects were based on the information provided by their female cohort, Jai Sunshine Chua.

Chua and the two suspects were part of the 10-man group who abducted men, including a minor, in Ususan early in February under the guise of being PDEA agents, complete with uniforms and firearms.

Far from being just a ragtag gang, the suspects had an elaborate modus operandi under which they would threaten their kidnapped victims with false drug charges in an attempt to extort money from them or their relatives.

On Feb. 18, Taguig police officers chased the suspects all the way to Makati after they were spotted again in Ususan. They were not able to arrest any of the suspects then, and only recovered sachets of crystal meth (shabu), fake bills worth P296,000, and various firearms inside the gang’s abandoned Toyota Hilux.

Umayao said it was the minor who would drive the Toyota Hilux that they used in their operations.

“Based on this, we can say that the leader of the group trusts his minor men more, based on the job and weapons given to them,” Umayao said.

PDEA Director General Aaron Aquino clarified that all the suspects were not PDEA agents.

He said it was Dela Cruz who supplied them with uniforms and firearms.

Of the 10 members of the group, six are still at large – Dela Cruz, Junjun Patawi, Patrick Amit, Michael Corpuz, Glenn Santiago and another minor.

Taguig police officers had filed a series of complaints before the city prosecutor’s office last month – including brigandage, carnapping, kidnapping for ransom, robbery, usurpation of authority, and illegal possesion of firearms and ammunition. /atm