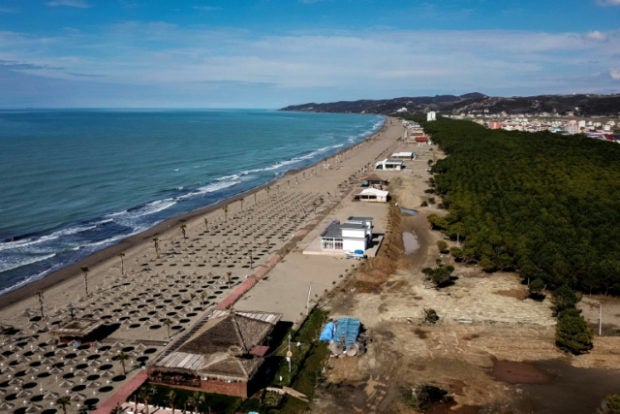 Fabian Zhilla, of the Canadian Institute of Technology who specialises in the subject of organized crime, called the problem “white-collar organized crime”. Image: AFP/Gent Shkullaku

Only when the police questioned him in January did Rrahman Qosja discover he had been the victim of identity theft — some of Albania’s publicly owned coastline had been sold in his name.

“This is a mafia, more dangerous than a mafia,” said the shocked septuagenarian, a farmer from Sterbeg, a hillside village some seven kilometres (4.5 miles) from the Adriatic coast.

And Qosja was not alone in his misfortune — in total, 180 ordinary people like him were caught up.

They were all supposedly co-owners of the land — part of an army military base at Rreth-Greth — and had “sold” it to a businessman, according to prosecutor Artan Madani in the western town of Kavaja, who is leading the probe.

Although spectacular in scale, the case is far from unique.

Similar variations of the audacious fraud have become common in Albania, one of Europe’s poorest countries.

“It seems to follow the same pattern in each case,” the police’s anti-financial crime chief Lutfi Minxhozi told AFP.

With the help of corrupt property notaries, officials and local politicians, crooks, money launderers or shady promoters create false property certificates on behalf of individuals who are totally unaware.

They then “buy” the plots of land, which are actually the property of the state, and resell them at a higher price or construct villas, buildings and hotels on them.

A gravedigger with 220 hectares

A top judiciary official, who asked not to be named, told AFP about the case of a gravedigger in the southern coastal city of Vlora.

He had no inkling that he was supposedly the “owner” of 220 hectares (540 acres) of military land in the Karaburun peninsula.

In early March, the authorities decided to examine more than 30,000 property titles on 200 square kilometres (77 square miles) of coastline, according to the urban planning administration.

By mid-March, all sales had been suspended along 450 km of the coast, from Shengjin in the north to Saranda down in the south.

Other moves to clamp down on property fraud already got under way at the start of the year.

In February, a dozen beach bars and restaurants were pulled down near Golem in the north.

Bank accounts, villas, land and hotels are increasingly being seized.

Albania is plagued by corruption, the looting of public property and an anarchic land registry system.

Its coastline has been disfigured by concrete, environmental degradation is ignored, while money laundering and trafficking, especially of drugs, is rife.

In Qosja’s case, the police probe revealed that his personal documents and signature had been misused by a local official when Qosja went to register land acquired by his family in the 1990s, Madani said.

Prosecutors in the case, which concerns 10 hectares, are investigating 23 people, including officials and local politicians.

“It is white-collar organized crime, which falls under corruption and money laundering via property,” said Fabian Zhilla, of the Canadian Institute of Technology who specializes in the subject of organized crime.

It is a “mafia-style” crime “if one looks at the nature of its organisation and the land concerned”, said Minxhozi, of the police’s anti-financial crime squad.

In 2011, a judge Skerdilajt Konomi was assassinated in Vlora.

Investigators believe he paid the ultimate price for refusing to sign fake property deeds for land near the western port city of Durres, said a legal source from the prosecutors’ office for serious crime.

Stretching to the south of Durres, kilometres of concrete buildings, often empty, blight the coast.

“Every official involved will be held criminally responsible, regardless of their hierarchic level,” Madani said.

Albania has instigated judiciary reform in a bid to clamp down on corruption and links to organized crime as part of Brussels’ demands for entry into the European Union.

A candidate since 2014, Albania hopes to begin accession talks this year.

Justice Minister Etilda Gjonaj has pledged that the reforms will enable authorities to “identify judges and prosecutors involved in illegal operations.”

The task may be challenging since many fraudulent operations have already been “laundered,” for instance through municipal councillors or mayors buying votes in exchange for issuing backdated property certificates or building permits, a notorious practice in Albania, according to journalist and analyst Aleksander Cipa.

However, on March 16 arrest warrants were issued for 24 people in the northern town of Lezha, including the mayor and his deputy.

With an eye on developing its tourism, the stakes for Albania are also economic.

In 2009, the French holiday company Club Med gave up plans for building a village resort on the Ionian coast due to a land ownership dispute. CC