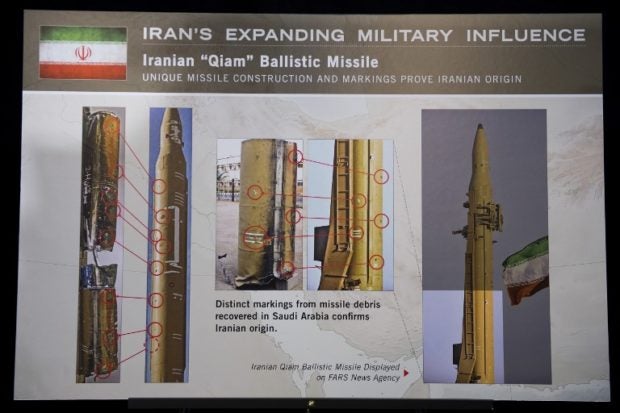 A placard describing pieces of an Iranian Qiam Ballistic Missile on display after US Ambassador to the United Nations Nikki Haley unveiled previously classified information intending to prove Iran violated UN resolutions by providing the Houthi rebels in Yemen with arms during a press conference at Joint Base Anacostia in Washington, DC, on December 14, 2017. AFP FILE

DUBAI, United Arab Emirates — Yemen’s Shiite rebels fired a barrage of ballistic missiles targeting Saudi Arabia late Sunday on the third anniversary of a kingdom-led war in Yemen, with fragments of one missile over Riyadh killing one person and wounding two.

The casualties were the first in Saudi Arabia’s capital since the Saudi-led war in Yemen began in March 2015, though previous rockets fired by the Yemeni rebels have caused deaths in other parts of the kingdom.

The rebels known as Houthis said they launched a missile attack targeting Riyadh’s King Khalid International Airport and other sites, again showing their ability to strike deep into the neighboring kingdom amid the stalemated war in Yemen, the Arab world’s poorest country.

The barrage likely will spark new criticism of Iran’s role in the conflict as well, as the Houthis identified some of the missiles fired as a type that the United Nations and the West say comes from Tehran.

The Saudi military said it intercepted seven ballistic missiles fired by the Houthis at the kingdom, three of them targeting Riyadh, two targeting Jazan and one apiece targeting Najran and Khamis Mushait.

The Saudi-owned satellite news channel Al Arabiya aired footage that it said showed Patriot missile batteries firing at the incoming Houthi missiles. Online videos showed what appeared to be a missile fuselage lying on a street in Riyadh.

One Egyptian national was killed and two other Egyptians suffered wounds when a fragment of a missile over Riyadh fell on a residential neighborhood, the state-run Saudi Press Agency said.

Houthi ballistic missiles have increased in range over time, with the first one targeting Riyadh fired on May 19, 2017, according to the United Nations. A Nov. 4 launch previously targeted King Khalid International Airport, showing the missiles had a range of over 1,000 kilometers (620 miles).

The Nov. 4 attack saw the Saudi-led coalition escalate its attacks. It wasn’t immediately clear how the coalition would react to Sunday’s attack, though the barrage marks some 90 Houthi ballistic missile launches targeting Saudi Arabia.

Al Masirah, a Houthi-run satellite news channel, identified some of the missiles fired as the Burkan, or Volcano, missile. The United Nations, Western countries and the Saudi-led military coalition fighting in Yemen all say the Burkan mirrors characteristics of an Iranian Qiam ballistic missile. They say that suggests Tehran either shared the technology or smuggled disassembled missiles to the Houthis who then rebuilt them.

Iran long has denied supplying arms to the Houthis, though a growing body of evidence contradicts their claim.

Meanwhile, the U.S. provides logistical support and weaponry to the Saudi-led coalition, which has been criticized for its airstrikes on Yemen killing civilians, as well as a blockade of Yemeni ports that has brought the country to the edge of famine.

Over 10,000 people have been killed in the conflict, which began after the Houthis and their allies seized Yemen’s capital, Sanaa, in September 2014 and began a march south. /cbb