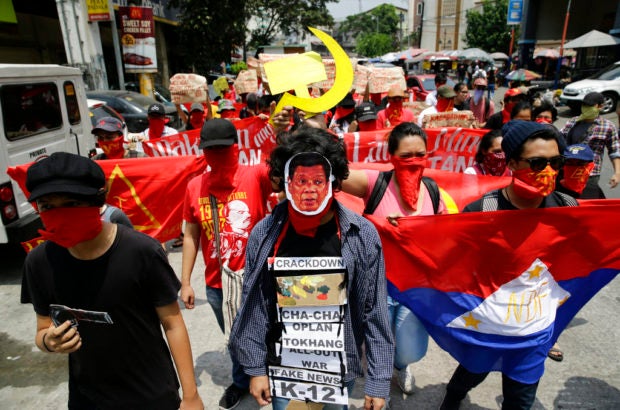 A protester from the outlawed “Kabataang Makabayan,” Patriotic Youths group, wears a mask showing the face of Philippine President Rodrigo Duterte during a rally to commemorate the 49th anniversary of the New People’s Army, the armed wing of the Communist Party of the Philippines, near the Malacanang presidential palace in Manila, Philippines on Wednesday, March 21, 2018. Duterte declared that communist guerrillas waging a decades-long rebellion are terrorists, in a move jeopardizing the resumption of peace talks with the insurgents. (AP Photo/Aaron Favila)

One-fifth of the members of the House of Representatives have crossed party lines to urge President Rodrigo Duterte to “listen to the clamor of the people” to resume peace talks with the National Democratic Front of the Philippines (NDFP).

The NDFP is the political arm of the Communist Party of the Philippines (CPP), which has been waging an armed insurgency for almost 50 years.

In House Resolution No. 1803, the 61 lawmakers also called for the conclusion of the comprehensive agreements on socioeconomic and political reforms to “lay the basis for a just and lasting peace.”

The lawmakers held on to Mr. Duterte’s remarks on Feb. 20 that he might reopen the negotiations but would have to consult military officials first. This followed a meeting with Norwegian officials who host the talks.

Mr. Duterte met with Idun Tvedt, Norwegian special envoy to the peace process between the Philippine government and the NDFP, in Davao City on Feb. 15.

The President on Nov. 23 last year terminated the peace talks through Proclamation No. 360, which cited the alleged insincerity of the CPP and its armed wing, the New People’s Army, by committing unspecified “acts of violence and hostilities.”

The termination came two days before the fifth round of formal talks were supposed to be held from Nov. 25 to 27 in Oslo. The agreements on socioeconomic reforms and general amnesty for political prisoners were supposed to have been discussed.

“Compared to previous administrations, peace negotiations under the Duterte administration have reached remarkable and unparalleled headway after the four successful rounds of negotiations,” the resolution read.

“Continuing the peace talks would benefit the Filipino people, most of whom are poor peasants and workers, as the agreements on agrarian reform and national industrialization may address their issues and concerns and help provide relief for their economic hardships,” it added.

When Mr. Duterte ended the talks, negotiators were already working on the draft of the Comprehensive Agreement on Social and Economic Reforms (Caser), aimed at addressing the economic grievances and social inequalities that caused the insurgency.

The resolution was signed by the peace, reconciliation and unity committee chair, Ruby Sahali, and three of the four vice chairs—Jose Christopher Belmonte, Jesus Nonato Sacdalan and Amihilda Sangcopan.

The fourth vice chair, Shernee Tan, did not sign the resolution. Tan is an advocate of martial law nationwide.