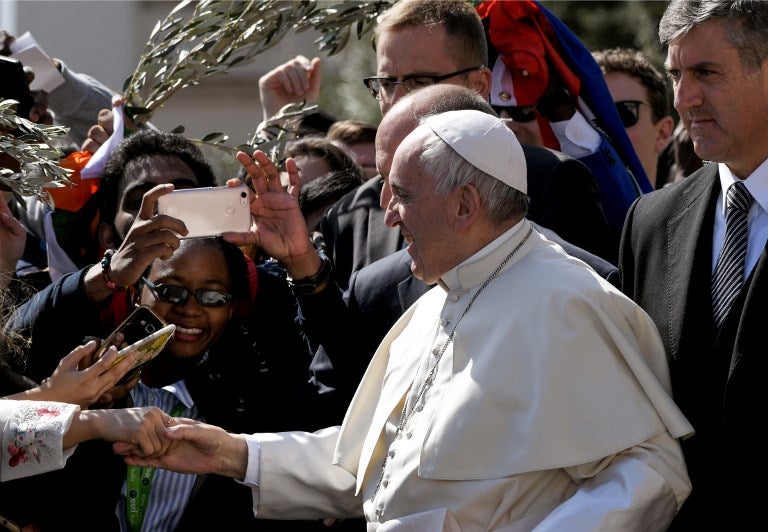 Pope Francis shakes hands with faithful at the end of the Palm Sunday mass in St. Peter’s square on March 25, 2018 at the Vatican. Palm Sunday marks the sixth and last Sunday of the Christian Holy month of Lent and the beginning of Holy Week.
/ AFP PHOTO / Marco BERTORELLO

Pope Francis on Sunday urged young people not to allow themselves to be silenced and to stand up for what they believe in, a day after more than a million people in the United States took part in student-led protests demanding tighter gun control.

“Dear young people, you have it in you to shout,” the pontiff told the traditional Palm Sunday mass on Saint Peter’s Square, which this year coincides with World Youth Day.

While the pope was not talking about the US protests and made no reference to them in his address, his comments came just a day after huge gun control rallies were staged all across the US.

“It is up to you not to keep quiet,” Francis told young people.

“Even if others keep quiet, if we older people and leaders, so often corrupt, keep quiet, if the whole world keeps quiet and loses its joy, I ask you: Will you cry out?”

The pope said that the temptation had always been there to silence young people.

There were “many ways to silence young people and make them invisible,” he said.

“Many ways to anesthetize them, to make them keep quiet, ask nothing, question nothing. There are many ways to sedate them, to keep them from getting involved, to make their dreams flat and dreary, petty and plaintive.”

But he pointed to a passage in the Bible where Jesus had been asked to rebuke his disciples for speaking out against injustice.

The pope quoted Jesus’ reply, saying “‘If these were silent, the very stones would cry out’.”

“Please, make that choice, before the stones themselves cry out,” he urged young people.

The marches “for our lives” across the US on Saturday were spearheaded by survivors of a shooting in a Florida high school last month where 17 people were killed.

They are demanding tighter controls on the sales of weapons, especially assault rifles, and directing their fury toward the powerful gun lobby, the National Rifle Association, and politicians who have failed to enact meaningful legislation to address rampant gun violence that kills 30,000 people per year in the US.