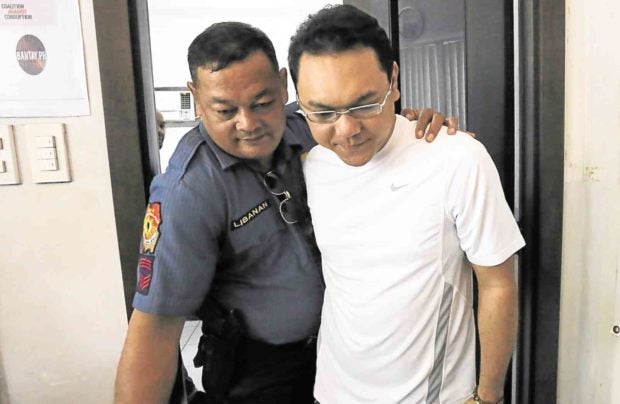 Bohol Provincial Board Member Niño Rey Boniel is escorted back to his detention cell in Cebu City hours before he is transferred in June 2017 to a jail facility in Bohol nearer his hometown in Bien Unido. (File photo JUNJIE MENDOZA / Cebu Daily News)

The Department of Justice (DOJ) has ordered the dismissal of the criminal charges filed against Bohol Provincial Board Member Niño Rey Boniel for parricide.

Boniel was tagged as the prime suspect in the disappearance of his wife, Bien Unido Mayor Gisela Boniel, who was presumed dead.

As of this writing, Boniel is detained at the Cebu Provincial Detention and Rehabilitation Center.

He was accused of shooting his wife on June 7, 2017 aboard a boat off Caubian Island in Lapu-Lapu City. Then he allegedly threw her body off the boat.

The DOJ ordered the withdrawal the charges after it granted the petition for review filed by Boniel.

In his petition, Boniel said that Lapu-Lapu City investigating prosecutors erroneously concluded that probable cause exists and that he should be held for trial for parricide.

He also said that the Lapu-Lapu City Prosecutor’s Office had no jurisdiction over the crime charged and that a crime for parricide should be filed separately from the crime of serious illegal detention.

In an 11-page resolution signed by Justice Undersecretary Reynante Orceo, the DOJ reversed and set aside the resolution issued by the Office of the City Prosecutor of Lapu-Lapu City dated June 28, 2017 that indicted Boniel for parricide charges.

“To go on with their trial borders on the ludicrous sans the alleged main actor,” the DOJ resolution stated.

READ: Bohol Board Member Boniel charged with parricide in court

According to the DOJ, the courts in Bohol have jurisdiction over the case, not the courts in Cebu, since the crime happened in the province.

The DOJ stressed that the act of killing should not be considered a separate crime from kidnapping.

“The killing, if found by the prosecutor’s office in Bohol to have been committed, could not be considered a separate crime,” the DOJ said.

“The kidnapping, which allegedly took place in Bohol would be considered a necessary means to commit the murder. And since the investigation commenced in Bohol, it should take cognizance of the case,” it stressed. /atm