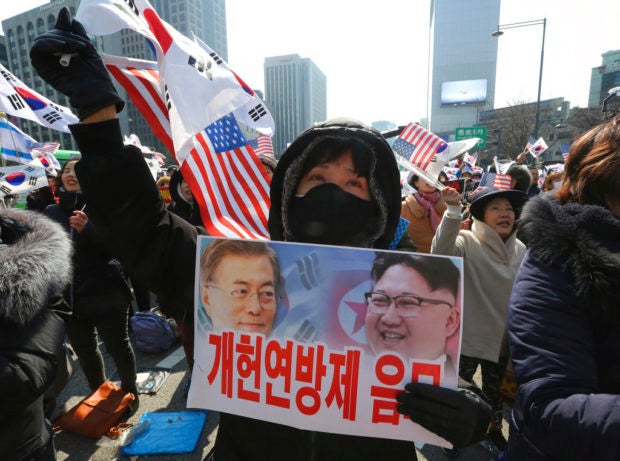 In this March 1, 2018, photo, a conservative activist with a card showing a portrait of South Korean President Moon Jae-in and North Korean leader Kim Jong Un, right, attends a ceremony to celebrate the March First Independence Movement Day, the anniversary of the 1919 uprising against Japanese colonial rule, in Seoul, South Korea. Moon plans to send a special envoy to North Korea soon to set up more meaningful dialogue between the rivals that Seoul hopes will eventually include discussions over disarming the North of nuclear weapons. The signs read: ” Constitutional reform plot.” (AP Photo/Ahn Young-joon)

The summit aims to improve relations and resolve the standoff over the North’s nuclear program.

The rivals agreed to a summit in late April when Moon’s envoys visited Kim in Pyongyang earlier this month. South Korean officials also brokered a potential meeting between Kim and President Donald Trump by the end of May.

The leaders of the two Koreas have held talks only twice since the 1950-53 Korean War.

It’s unclear whether the leaders’ meetings between Seoul, Pyongyang and Washington, if they take place, could lead to any meaningful breakthrough after an unusually provocative year. North Korea in 2017 tested its most powerful nuclear weapon to date and test-launched three intercontinental ballistic missiles theoretically capable of striking the U.S. mainland.

There are also concerns in South Korea over whether the appointment of John Bolton, Trump’s hawkish replacement of national security adviser H.R. McMaster, could potentially complicate efforts to set up talks between Trump and Kim, given his past bellicose rhetoric about North Korea.

A South Korean presidential official, who didn’t want to be named, citing office rules, downplayed such worries on Friday, saying that Trump remains firmly committed to the summit and is leading the drive to set it up.      /muf