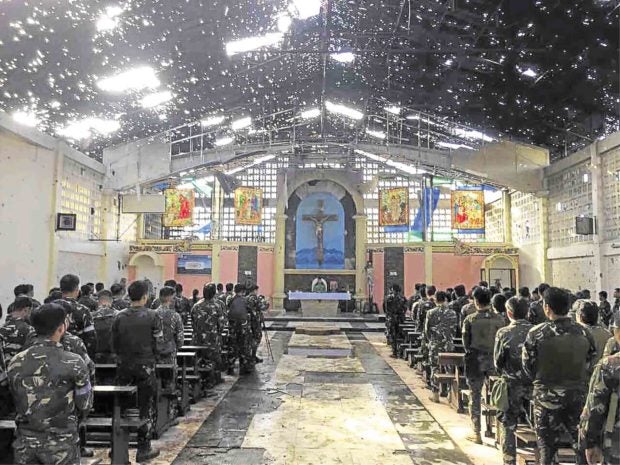 In a sign of how deep Marawi City’s wounds had gone, there will be no Holy Week services at St. Mary’s Cathedral, the seat of the Prelature of Marawi and one of the landmarks severely devastated in the battle to free the city from the grip of terrorists last year.

Marawi Bishop Edwin dela Peña on Friday said the cathedral was so severely damaged as a result of the five-month-long siege that there would be no Lenten services this year.

“For the first time in many years, we will not hold any service in the cathedral itself. But in other parishes in the prelature, we will have our Holy Week services,” he said.

Dela Peña made the remarks in a press briefing in Manila organized by Aid to the Church in Need (ACN) Philippines to launch its fundraising campaign for the war-torn Islamic city.

ACN Philippines has partnered with the Prelature of Marawi for the rehabilitation and healing of thousands of families displaced by the fighting, which raged from May to October.

The church emerged as a heavily scarred witness to the urban warfare between government troops and the Islamic State-inspired Maute terrorist group. Early in the conflict, the terrorists even took a video of themselves smashing religious icons inside the church.

Retaking it in August, troops gathered to hear Mass at the bullet-riddled structure.

Catholics are considered a minority in Marawi City, comprising around 5 percent of the population, Dela Peña noted.

He assured the faithful that Holy Week services would still be held in six other parishes under the prelature, with 10 volunteer Redemptorists, Franciscan and diocesan priests from Dumaguete coming over to help.

“All the priests are at their posts to serve the people during the Holy Week,” the bishop added.

ACN Philippines launched its Duyog Marawi campaign on Friday, focusing not only on the physical rehabilitation of the city but also on the spiritual healing of its people.

“It is a campaign for prayers … (and) an appeal for funds to help rebuild the ruined homes in Marawi. It is a call for all peace-loving peoples never to allow the Marawi war ever to happen, anywhere else again,” said Lingayen-Dagupan Archbishop Socrates Villegas, who also serves as president of ACN Philippines, an international Catholic charity organization which opened its office in the country in 2016.

“Let Duyog Marawi be our common pledge to sow peace and plant seeds of compassion everywhere. Wars are born from hearts that are cold and unforgiving. Conflicts arise when we lose sight of our common destiny which is eternal peace in heaven. War never again. Let the war in Marawi be the last,” Villegas said in a statement.

Jonathan Luciano, national director of ACN Philippines, said the program would focus on five major concerns—healing, interfaith dialogue, livelihood support for affected residents, the rehabilitation of the St. Mary’s Cathedral, and support for the 148 Christian and Muslim volunteers.

“We cannot do this alone, as we are supported solely by donors worldwide. We are encouraging our fellow Filipinos to join us in this mission. There are many ways to support us, and we are partnering with different dioceses as well to ask for their support,” Luciano said.

Luciano said the fundraising campaign is a call for Catholics to “concretize their penance into charity” especially during the Holy Week.

Dela Peña urged Catholics to do their part as followers of Jesus Christ and in response to God’s invitation. “It will take a long time for Marawi City to rise from the ashes. It would be impossible for it to rise alone. Let us do our share for the reconstruction of Marawi, not so much the structures, but the people’s healing and livelihood,” he said.