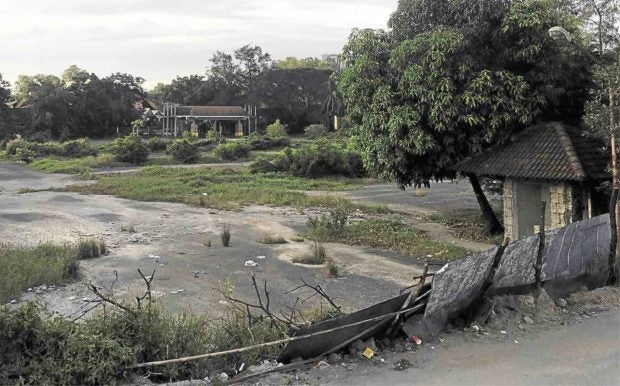 CHRISTMAS SPIRIT GONE Paskuhan in the City of San Fernando, once described as the only Christmas Village in Asia, is now a picture of decay and neglect. —TONETTE T. OREJAS

CITY OF SAN FERNANDO—The city government and the Office of the Solicitor General (OSG) this week asked a local court to revoke the 2015 sale of the deteriorating Paskuhan Village here to a developer owned by a mall giant.

The House committee on good government and public accountability investigated the sale to Premier Central Inc. (PCI) by Paskuhan’s owner, the Tourism Infrastructure and Enterprise Zone Authority (Tieza), and concluded that it should be nullified for violating the tourism code.

Tieza did not act on the committee’s recommendations, so the OSG went to court, Guevarra said.

The court was also asked to stop PCI, a subsidiary of SM Prime Holdings Corp., from registering the two Paskuhan lots in its name.

Reached by the Inquirer, PCI said it would issue a statement. The firm, however, had not released a statement as of Thursday.

The officials asked the court to prohibit Tieza from selling the properties to other parties. Tieza, under then general manager Mark Lapid, sold the lots in 2015 for P939.6 million.

Santiago said they filed the lawsuit “in defense of our local heritage.”

The sale, the OSG and the city government said, was void from the start since Paskuhan, also known as the Philippine Christmas Village and the first of its kind in Asia, is a cultural treasure that should be preserved according to the Tourism Act of 2009 (Republic Act No. 9593).

They said the late Jesus Lazatin agreed to sell the properties—where Paskuhan stands—to Tieza’s precursor, the Philippine Tourism Authority, because the government “intended to set up a world-class cultural, historical and commercial center.”

According to them, the City of San Fernando’s right of first refusal was violated when it was not asked on the sale of Paskuhan.

Last year, Santiago filed notices of adverse claims on the land titles covering Paskuhan. Although the Paskuhan sale went through a public bidding, the OSG and the city government said the process violated the Commission on Audit (COA) circulars such as the required presence of a COA auditor.

COA did not recommend the sale in 2013 and instead advised Tieza to rehabilitate Paskuhan, privatize it or offer it for long-term lease. COA also suggested that Paskuhan operations could be devolved to the city government. —TONETTE OREJAS

Read Next
Duterte to spend Holy Week in Davao City
EDITORS' PICK
Alex Eala wins Grand Slam on Independence Day: ‘I hope I made my contribution to the country’
Kai Sotto continues to inspire Filipinos by sharing his passions and stories with Smart Prepaid
Ahead of ONE: Full Blast II, Mongkolpetch warns Elias Mahmoudi: ‘Watch out for my fists’
G7 rivals China with grand infrastructure plan
PNP, PDEA destroy P25.8M worth of marijuana in Kalinga
Rare earth metals at the heart of China’s rivalry with US, Europe
MOST READ
Groups slam Duterte ‘surrender’ to China
PH logs 7,302 new COVID-19 cases — DOH
1Sambayan names 6 choices to pit vs Duterte’s anointed in 2022
MVP steps into new role as top PLDT cheerleader
Don't miss out on the latest news and information.