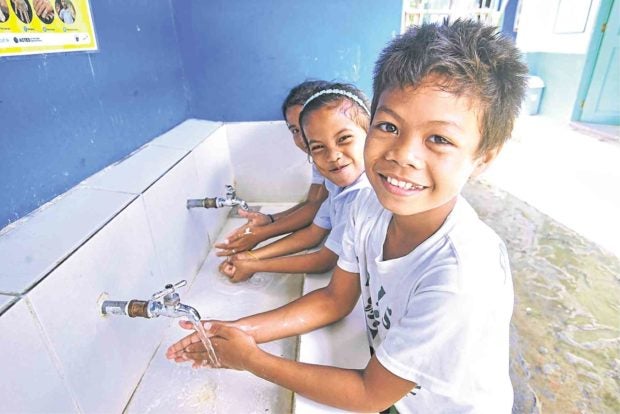 Lorenza Daa Memorial Elementary School (LDMES) sits atop a hill on the outskirts of Tacloban City.

More than 200 students from different villages in Tacloban and the adjacent towns of Alang-alang and Santa Fe are all too familiar with the trip up and down the rolling road to this school.

But when it was time for her to help fetch water for the day’s use, the 13-year-old Dangkalan would look at the hill’s slope with much disdain.

“It was very difficult to fetch a pail of water there,” she said, referring to the steep trek to a well outside the school compound.

But it was a routine that Dangkalan and most of the older students at LDMES had to endure because of the school’s location.

The solar pumps were installed within rainwater harvesting systems for schools in off-grid, rural communities.

Through the elevated water tank, enough pressure is created to supply water to the school’s hand-washing facility and toilets.

In the town of Tanauan, Maghulod Elementary School has opened its gates to villagers.

Liezel Ada, a mother of five, is thankful that the school allows them to fetch water at this solar-powered water pump which they use for cooking and drinking.

Ada recalled how a 6.5-magnitude earthquake in 2017 cut off the power supply in Leyte. The school’s solar-powered water pumps saved them, she said.

“It is difficult not to have water especially when disaster strikes,” Ada said.

Today, residents are still allowed to get water inside the school for a fraction of the cost compared to traditional water vendors. For only P2 per jug of water, residents contribute to the maintenance of the water facility.

“That is a lot cheaper than the cost of P40 per jug in water refilling stations. We can already buy a kilogram of rice with that amount,” Ada added.

In other communities, local officials had allocated funds in the barangay’s annual budget for the repair and maintenance of the water system inside the school.

Residents living near these schools have also volunteered to become caretakers of tap stands and regularly check them for leaks.

Parent and school brigades were trained on maintaining the water systems.

Gervacio Boco was an officer of the Parent-Teacher Association in Maghulod Elementary School when he learned how to clean and fix the solar panels.

“We tell the children to also take care of the panels. They should not be throwing rocks and other stuff onto the roof,” he said.

Dangkalan said she had learned to value the importance of having access to clean water while in school.

“With enough water, we can spend more time studying than fetching water from the well,” she said.

Unicef first introduced the solar pumps in 2015, particularly in disaster-affected communities in Leyte.

Unicef, in a statement, said it believed that solar-powered water systems would help increase the resilience of poorest communities.

It said schools and communities that had benefited from solar-powered water pumps attested that these enabled them to become less dependent on fuel supply to power their water systems and maintain these at very minimal cost. —ROEL T. AMAZONA, CONTRIBUTOR