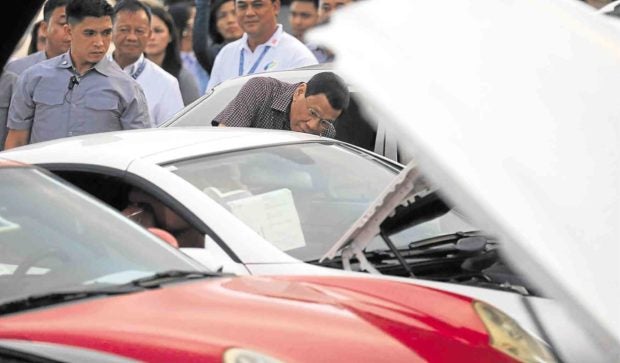 STA. ANA, Cagayan — The administrator of Cagayan Economic Zone Authority (Ceza) has ordered an overhaul of the security force at Port Irene, following the disappearance of decals of some luxury cars that were crushed last week.

Lawyer Raul Lambino said he was terminating Ceza’s engagement with Sigma Security Services Inc., the private agency contracted to secure Port Irene and other Ceza facilities, for the theft of decals from five luxury cars the night before they were destroyed on March 14.

“I was really outraged because how can we still trust these security guards if they are the ones stealing the things they are supposed to guard?” Lambino said.

On March 20, the Sta. Ana police filed qualified theft charges against two security guards, Rosendo Malazzab and Arnel Time, after the theft of the emblems of Porsche, Mercedes Benz, Maserati, BMW and Opel cars were discovered.

The five luxury cars were among the 14 vehicles that were crushed on March 14 at Port Irene. President Duterte, Cabinet secretaries and other officials witnessed the wrecking.

Investigation showed that the emblems of the five vehicles were removed on the night of March 13, moments after the two suspects, who were then off-duty guards, were seen taking photographs with the cars.

“A review of the photos they took with their mobile phones showed the cars still with their emblems intact, which led us to conclude that they were responsible,” said Chief Insp. Harvey Pajarillo, Sta. Ana police chief.

Laurence Umayam, officer in charge of the freeport, said both guards had been dismissed. Two other guards, who were on duty at that time, had been relieved.