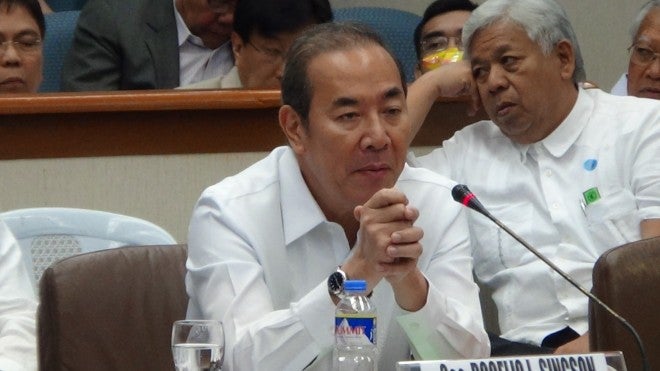 The National Bureau of investigation (NBI) on Wednesday filed before the Office of the Ombudsman a plunder complaint against former public works secretary Rogelio Singson and 33 others in connection with an alleged right of way scam in General Santos City.

“This Bureau respectfully recommends that the erring government officials and their cohorts be charged of Plunder with a recommendation of forfeiture proceedings; violation of Section 3(e) of RA (Republic Act) 3019 otherwise known as the Anti-Graft and Corrupt Practices Act and administratively be charged for Grave Misconduct and Dishonesty,” NBI Director Dante A. Gierran said in his letter dated March 20, 2018, to Ombudsman Conchita Carpio-Morales.

Based on the complaint, Singson allegedly requested payments for the claimants based on spurious documents submitted by the regional office of Department of Public Works and Highways (DPWH).

He also allegedly authorized the payment in favor of the claimants who turned out to be bogus.

When sought for comment, Singson, who is currently out of the country, said he would first have to get details of the complaint.

Last year, Justice Secretary Vitaliano Aguirre II ordered the NBI to investigate the claims of Catapang who admitted that he was part of a syndicate that fabricated and submitted fake documents such as land titles, special power of attorney, tax declarations, and appraisal reports to claim “just compensation” from the government through the DPWH.

Just compensation is the fair value of the property between one who receives and one who desires to sell, fixed at the time of the actual taking by the government.

Catapang, who has been admitted to the government’s Witness Protection Program, said that once the claims were cleared by the concerned government agencies, the claims for just compensation were processed by the DPWH for a fee exclusive of their share in the proceeds of the bogus claims.

According to Aguirre, the modus operandi of the syndicate was to claim compensation for the road right of way intended for land owners affected by the construction of a highway in General Santos City.

During a Senate hearing, Singson denied involvement in the alleged scam which reportedly defrauded the government of P8.7 billion during previous administrations.

Singson said many of the claims were made in 2007 and 2009 when he was not yet public works secretary.

However, he acknowledged that he authorized the payment of P2 billion for claims despite his misgivings that the amounts seemed too much.

He said he authorized the payments based on documents submitted by the Department of Public Works and Highways based in Region 12.

Nevertheless, he said he ordered a stop to the payments in 2012 if these were without the validation by the Land Registration Authority. /cbb

Read Next
6 drug pushers nabbed in Quezon
EDITORS' PICK
Work-From-Home is here to stay and requires reliable logistics
Hong Kong to further tighten COVID-19 travel restrictions
USAID Opportunity 2.0 calls for applicants for grants for out-of-school youth engagement
Legarda emphasizes role of ICC/IPs in nation building this IP month
Only 4,393 new COVID cases logged due to low number of tests
DOTr to defend proposal to increase passenger capacity in public transport
MOST READ
Bongbong says PH should modernize infrastructure to become Asia’s next logistics hub
Martires asks why he is being singled out over issues on releasing SALNs
Isko to critics after remarks vs Robredo: I’m sorry, this isn’t about Mr. Congeniality
PDP-Laban’s Cusi wing inks coalition deal with Reform Party
Don't miss out on the latest news and information.