AFP on alert for NPA anniversary 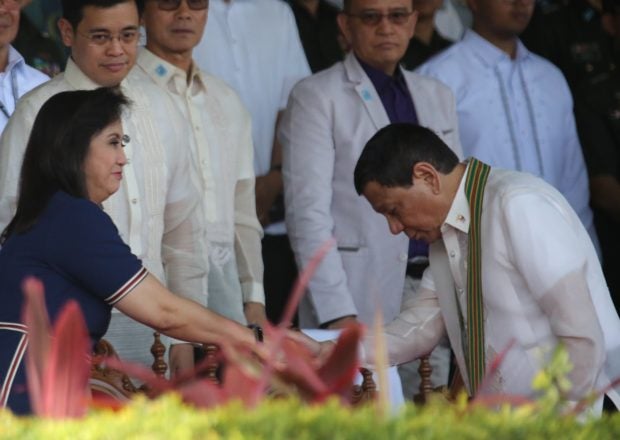 REUNION AT FORT BONIFACIO President Duterte and Vice President Leni Robredo meet again at ceremonies marking the 121st founding anniversary of the Philippine Army, which continued to be in the front line of the war on communist rebels. —JOAN BONDOC

The Armed Forces of the Philippines (AFP) will not let its guard down as the 49th founding anniversary of New People’s Army (NPA) draws near.

Rebels traditionally launch attacks on government targets to celebrate the founding, on March 29, of the NPA, the armed wing of Communist Party of the Philippines (CPP).

“Our forces will continue to be on a proactive stance,” said Brig. Gen. Bienvenido Datuin Jr., AFP sokesperson, in a statement.

Defense Secretary Delfin Lorenzana again called on communist rebels to lay down their arms after nearly 50 years of fighting.

Lorenzana said the NPA’s “cause has become irrelevant.”

“Do not be the spoilers of peace, progress and development,” said the defense chief, addressing himself to rebels.

He said if the rebels failed to win in 49 years of armed struggle, “what makes you think you could salvage victory in the next 50?”

Peace talks between the Duterte administration and National Democratic Front of the Philippines collapsed after President Duterte raged at the continued attack by NPA on government soldiers.

NPA accused the military, on the other hand, of continued operations against rebels.

Upon his election into office in May 2016, Mr. Duterte vowed to work closely with the CPP to achieve peace.

He appointed members of leftist organizations to Cabinet positions and freed several political detainees as a gesture of goodwill.