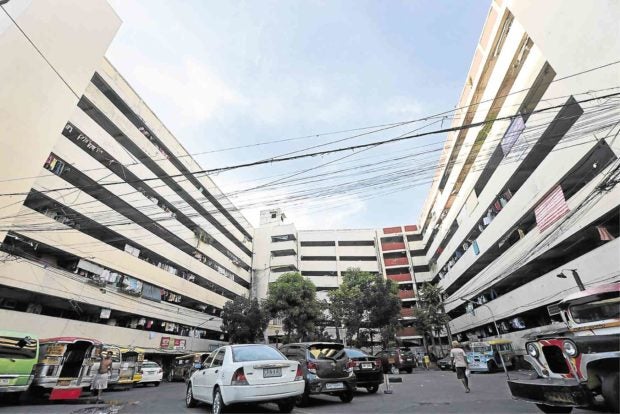 The National Housing Authority (NHA) has once again appealed to the over 6,000 families living in three condemned low-cost housing projects in Metro Manila to move out for their own safety.

In a press conference on Monday, the NHA said it was conducting “preeviction activities”—largely consultation meetings—with 712 families at Fort Bonifacio Tenement Building in Taguig City and over 6,000 families at Punta Santa Ana Tenement and Vitas Tenement, both in Manila.

Built in the 1960s, all three multistory structures were declared “structurally unsound, dangerous and high-risk” by the Department of Public Works and Highways in 2010. Despite this, only 154 families living at the Fort Bonifacio and Sta. Ana tenements have so far volunteered to be relocated, Elsie Trinidad, NHA spokesperson, told the Inquirer.

The NHA has offered all residents alternative government housing sites in Cavite, Bulacan or Rizal provinces but most of them have refused and demanded that they be relocated to areas within the metropolis.

At the Vitas Tenement, around 5,000 families continue to live in the low-rise buildings originally meant to serve as temporary housing for Smokey Mountain dump scavengers who were promised permanent shelters. Although a demolition order was issued for the Tondo tenement last year, it has yet to be implemented.

Trinidad said that in-city relocation was a task easier said than done, with the burden being on local governments to offer sites in their areas.

At the same time, there is an urgent need to get the families out of the condemned buildings as “we will also be held accountable if we do not exercise authority” in ensuring their safety, she added.

The NHA gave no specific timeline for when it would implement forced evictions. However, it said that should the residents continue to refuse to evacuate or if no compromise would be reached during the consultations, notices would be issued to the affected families 30 days before their forcible eviction.