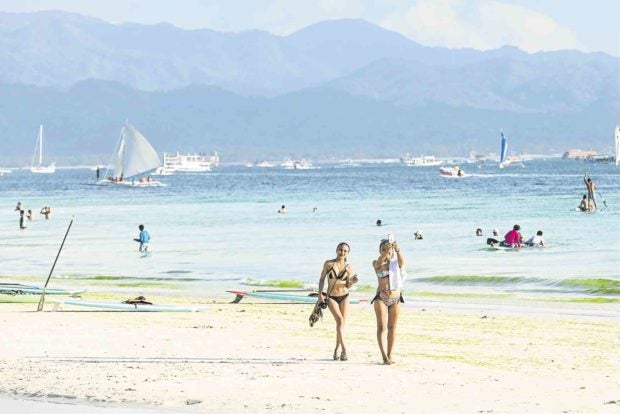 Hotels and resorts in Boracay are no longer sure of full bookings by tourists following President Rodrigo Duterte’s remark that the country’s prime tourist destination has become a “cesspool.” (File photo by JILSON SECKLER TIU / Philippine Daily Inquirer)

President Rodrigo Duterte on Tuesday said he would support the recommendation the Department of the Interior and Local Government (DILG) regarding the rehabilitation of Boracay.

Duterte said Eduardo Año, officer-in-charge of the DILG, told him on Monday night that the rehabilitation of Boracay would take a “bit longer.”

“Si Año, sabi niya sa akin: ‘Mayor… – kagabi sabi niya, Boracay he thinks will take a little bit longer. And I answered him. Sabi ko: ’General, nandiyan ka, I placed you there. Whatever is your decision, I will support you. Bahala ka. You just make the recommendation. And if I find everything that is alright and in consonance with the… derecho na,” Duterte said in his speech during the general assembly of the League of Municipalities of the Philippines at the Manila Hotel.

“Sabi niya: ‘It will take about something like six months.’ So do it. Kayo rin naman ang nagsira ng Boracay, hindi naman kami,” he added.

The DILG, the Department Environment and Natural Resource (DENR) and the Department of Tourism had earlier recommended the total closure of Boracay for a maximum of one year.

Duterte had earlier likened the world-famous tourist destination to a pit of human waste. /atm