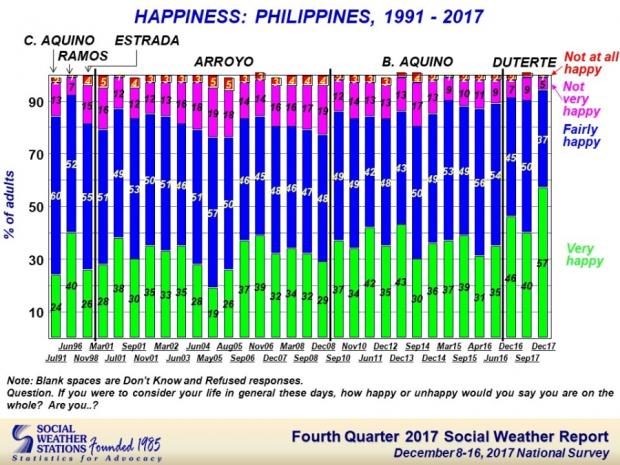 Happiness is in the air for a “record-high” number of Filipinos – at least according to a nationwide survey conducted by the Social Weather Stations (SWS) from Dec. 8 to 16, 2017.

Mindanao had the most number of “happy” Filipinos with 96 percent, followed by Luzon with 95 percent, Visayas with 94 percent, and Metro Manila with 90 percent.

Luzon had the most number of “satisfied” Filipinos with 94 percent, followed by Metro Manila with 93 percent, Mindanao with 91 percent, and Visayas with 89 percent.

Happiness and satisfaction were also most evident among Filipinos who have had formal education.

The survey was conducted using face-to-face interviews of 1,200 adults, aged 18 years old and above, nationwide.

It has a margin of error of ±3% nationwide, ±4% for Luzon, and ±6% each for Metro Manila, Visayas and Mindanao, the SWS said. /atm