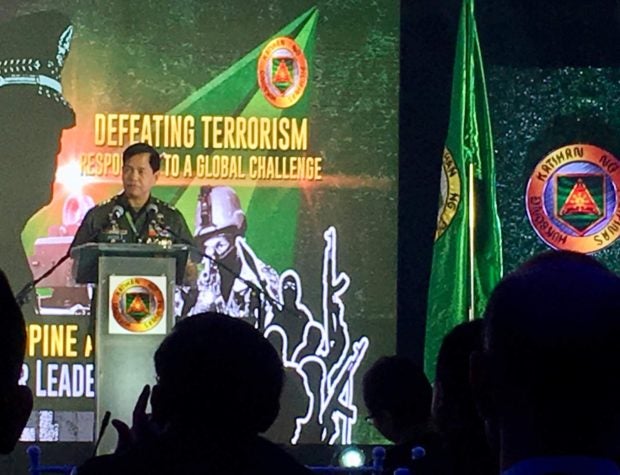 Senior Army officers gathered at headquarters in Taguig City for a two-day conference to address the country’s biggest security concerns: the threat of terrorism and violent extremism.

“The rise of terrorism and the spread of violent extremism have made our current security situation a very complex issue, which demands our utmost attention. It becomes the country’s top security concern, which the Philippine Army and even the armed forces of the different countries in the world are busy preparing to defeat,” said Army chief Lt. Gen. Rolando Joselito Bautista on Tuesday at the opening ceremonies of the conference.

Marawi City, the site of a five-month clash between government forces and Islamic State-inspired terrorists, was an eye-opener on the increasing threat of terrorism.

The Marawi siege started on May 23 last year when government forces tried to serve a warrant for the arrest of Isnilon Hapilon, the touted leader of the Islamic State (IS) in Southeast Asia.

The service of the warrant triggered a bloody conflict between government forces and IS-linked Maute fighters which prompted President Rodrigo Duterte to declare martial law in Mindanao on the same day.

The fighting lasted five months and left dead at least 168 security forces, over 900 Maute fighters, and at least 45 civilians.

Marawi City was left in ruins with more than 300,000 people displaced by the fighting. It was the country’s worst security crisis and the longest urban conflict in recent years.

“It was a classic example of how terrorism tried to infiltrate a nation. However, with our resounding victory in liberating the city of Marawi from the hands of the terrorist. We sent a message to the world that together, we can defeat the enemy, and that terrorism has no place in our country,” said Bautista, who was also the ground commander of the Joint Task Force Marawi at the time of the siege.

He also acknowledged the need to partner-up and collaborate with stakeholders, other agencies and in the international community in countering terrorism.

“Terrorism has been evolving through time. It has grown into a beast, tearing down transnational borders and continuously expanding its reach,” Bautista said of the conference with the theme “Defeating Terrorism, Responding to a Global Challenge.”

Speakers at the conference include Professor Julkipli Wadi of the Institiye of the Islamic Studies of the University of the Philippines, Sen. Gregorio Honasan II of the Senate Committee on National Defense and Security, Dr. Jolene Jerard of the Nanyang University — Rajaratnam School of International Studies and Director General Alex Paul Monteagudo, Ph. D. of the National Intelligence Coordinating Agency.

Bautista also expressed optimism that the conference will serve as a venue to formulate “innovations and strategies that will effectively address these emerging challenges.”