Lorenzana frowns on proposal to make Marines a separate branch 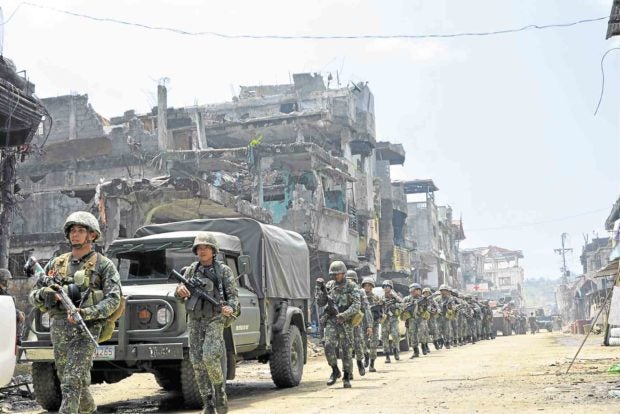 Defense Secretary Delfin Lorenzana has opposed the proposal to form the Marines into a new branch of service in the military.
“The Philippine Marine Corps (PMC) is basically a ground force and as such, they are now deployed as an infantry force in Mindanao. Making them as a separate service doing the same functions as the Army will mean there will be two ground forces in the country,” he said in a statement Wednesday.

The Philippine Army is currently the main ground force of the AFP at 85,000-strong. The Defense chief also said that the Army could easily learn the ship-to-shore operations skills that the PMC claims to have.

He also explained that marines are “expeditionary forces.”

“In other countries like the US, their Marines, upon which we patterned ours, are utilized for overseas deployment. That is also true with the Royal Marines of the UK. Both units are invasion forces embedded with their navies. The Philippines, on the other hand, will not be invading foreign shores anytime soon or ever,” he said.

Lorenzana also said that the PMC is intended as a “small force” only when it was created in 1950 by a General Headquarters order in 1950.

The PMC Act (House Bill No. 7304) proposes to establish the PMC, currently under the Navy’s command, as an independent branch of service of the Armed Forces of the Philippines.

The PMC would be “amphibious in character” and would be composed of ground combat, combat support, combat service support, aviation component and other necessary units.

The PMC’s current strength is estimated at around 9,300.

Read Next
BOC execs tagged by Lacson deny getting bribes from smugglers
EDITORS' PICK
Smart offers wireless fiber-like speeds to Filipino homes with country’s first 5G Prepaid Home WiFi
Pharmally’s Twinkle Dargani in tears when asked about missing documents
Corruption in PH: Where presidential aspirants stand
Two more sites at Robinsons Malls for temporary offsite passport services
BIR audits tax compliance of Pharmally
Holidays made best with Acer’s ‘Holidays at Home’ raffle promo
MOST READ
Roque ‘hurt’ after presidential aspirant did not adopt him in Senate lineup
Gordon: ‘How dare you ask for Filipinos’ vote when you failed them?’
Pharmally’s Twinkle Dargani in tears when asked about missing documents
WHO chief scientist say Omicron is very transmissible
Don't miss out on the latest news and information.