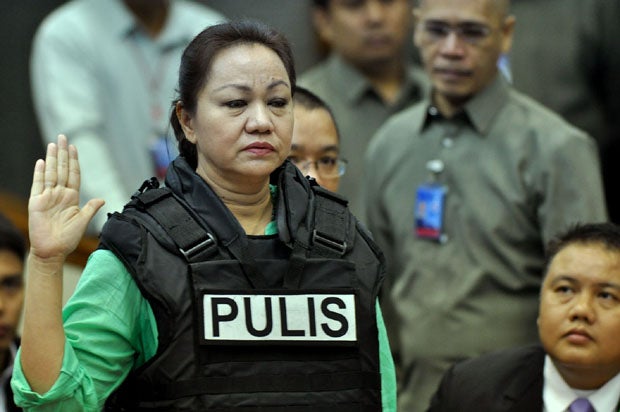 Janet Lim-Napoles–PHOTO BY RICHARD A. REYES

Several whistleblowers and two lawmakers on Sunday added their voices to those objecting to the admission into the Witness Protection Program (WPP) of businesswoman Janet Lim-Napoles, alleged mastermind of the P10-billion pork barrel scam.

Some of the whistleblowers in the pork barrel racket, according to their lawyer, were “alarmed” by the decision of Justice Secretary Vitaliano Aguirre II to grant provisional state protection to Napoles.

Lawyer Stephen Cascolan on Friday said the information that Napoles had been provisionally admitted by the Department of Justice (DOJ) as government witness caused “confusion” among his clients — witnesses Marina Sula, Arlene Baltazar and Simonette Briones.

Cascolan also raised doubt that Aguirre had authority to designate Napoles as a state witness, pointing out that the criminal cases that stemmed from the Priority Development Assistance Fund (PDAF), or pork barrel, racket were being handled by the Office of the Ombudsman.

He said Sula, Briones and Baltazar were worried that Napoles’ possible testimony would lead to the dismissal of the pork barrel scam cases.

“The cases may be diluted and their credibility as witnesses would be eroded,” Cascolan said.

“Napoles already admitted under oath during the Senate hearings that she [had] no knowledge [of] or ‘involvement’ in the PDAF scam,” Baligod said.

“How can she now be of any use to the state as witness? Those to be sued under Napoles’ testimony will just be too happy to have her as an adverse witness because they can easily destroy her credibility,” he said.

Luy, a former employee of Napoles, identified Napoles at the Senate hearings in 2013 as the one who orchestrated the scheme to divert P10 billion in PDAF allocations of lawmakers to dummy aid organizations and ghost projects to obtain kickbacks.

A lawmaker pocketed 50 percent of the supposed project funded by his PDAF, a pork barrel that funded his pet projects, while Napoles got 40 percent and government conduits, 10 percent, according to Luy.

On Sunday, a lawyer of Napoles, Stephen David, said his client was not the “most guilty” party in the pork barrel scam and was thus entitled to become a state witness.

“How can a private person who did not even go to college be the mastermind? To be able to manipulate the entire Senate or Congress, that does not seem believable?” David said in a radio interview.

The lawyer—whose wife became a deputy revenue commissioner under the Duterte administration—said the administration “sees what she [Napoles] knows,” so it decided to provisionally admit her into the WPP.

David hinted at Napoles’ knowledge of irregularities in the Aquino administration’s Disbursement Acceleration Program (DAP), but he did not disclose details.

The Aquino administration offered DAP funds to senators sitting as judges to sway their verdict in the impeachment trial of Chief Justice Renato Corona in 2013, according to former Sen. Jinggoy Estrada, after he was linked to the misuse of his PDAF allocations.

A team of National Bureau of Investigation agents has started interviewing possible witnesses in the DAP irregularities, the Inquirer learned on Sunday.

A source, who is privy to the investigation, said the NBI team met with the witnesses on Friday and notified the WPP regarding the probe as ordered by Aguirre.

The source said the witnesses, who were still under government protection, had previously testified in the PDAF scam.

The NBI launched its probe of the DAP controversy a few weeks before the DOJ granted provisional protection to Napoles, the source said.

Charged with plunder with Napoles in the Sandiganbayan in 2014 were then Senators Estrada, Bong Revilla and Juan Ponce Enrile.

In her 2014 affidavits, Napoles implicated 20 senators, 100 congressmen and their agents.

Albay Rep. Edcel Lagman said Napoles’ admission into the WPP, even if provisional, was premature and illegal.

He cited Section 10 of Republic Act No. 6981, which states that anyone who takes part in the commission of a crime must “not appear to be the most guilty” to become a state witness for admission into the WPP.

Sen. Leila de Lima, who led the filing of charges against Napoles when she was justice secretary, said the prime suspect in the scam would say and do anything she was told.

“This is why she was never considered a state witness by the Aquino administration,” De Lima said on Saturday from Camp Crame, where she is detained on drug trafficking charges. She called the charges against her trumped up and politically motivated.

Lagman said the protective custody given to Napoles on Feb. 27 was also illegal because her affidavit in applying for the WPP was still being examined.

Citing threats to her life, Napoles asked the Sandiganbayan on March 16 to transfer her to DOJ custody from her detention cell in Bicutan, Taguig City. —WITH REPORTS FROM PATHRICIA ANN V. ROXAS, VINCE F. NONATO, CHRISTINE O. AVENDAÑO AND FAYE ORELLANA