Rows of solar panels offer a reliable and stable source of power in Paluan. —PHOTO FROM REV. JERRY JALOS

CALAPAN CITY — Paluan, a third-class municipality, became what officials and project proponents said was the first town in the country to generate its own electricity — mainly from solar energy — ending decades of power shortage in the town of 16,000 people.

At the northern tip of Occidental Mindoro, Paluan now hosts a 6-megawatt microgrid that uses a “hybrid” system of solar panels and diesel-powered generators, which would produce electricity for as little as P9 per kilowatt hour.

The system, built on a 5-hectare land in the village of Alipaoy, was so far the biggest in Southeast Asia, according to project proponents.

It was also the first to use batteries manufactured by Tesla, a United States-based tech giant, specializing in electric cars and solar generators.

The panels were supplied by Solar Philippines, the first Filipino-owned solar panel maker based in Sto. Tomas town, Batangas province.

Solar Philippines president, Leandro Leviste, who led the Paluan plant inauguration on March 11, said it was his company’s commitment to bring “reliable, cheaper electricity [where] the need is greater.”

In a recent phone interview, Leviste said his company invested P100 million to build the Paluan facility but planned to build more in anticipation of increased demand.

After the system was tested in December, households started buying additional appliances, like air conditioners and refrigerators, which the townsfolk had gotten used to living without because of the power shortage.

Paluan Mayor Carl Pangilinan said the people of the town enjoyed their “first ever Christmas without brownout” when the system was tested.

Soda manufacturers and an ice plant expressed interest in relocating to Paluan, he said.

Pangilinan said the town could not get enough power supply from the main grid because “electric lines were not long enough” to reach the province’s northernmost town.

The town connected to the main grid in 1978 but it was virtually useless because electricity ran only for up to 12 hours a day with frequent outages that lasted for days, said the mayor.

“We even had to get our ice from Batangas [province],” Pangilinan added. 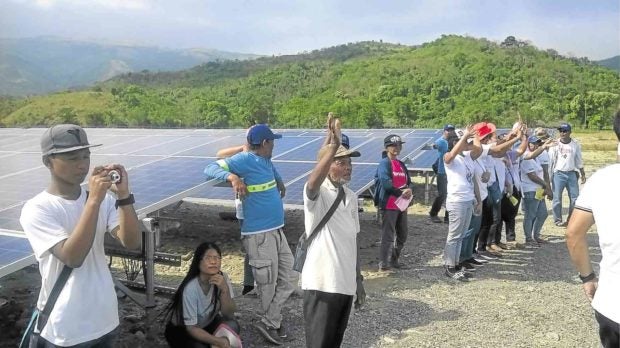 Residents and officials of Paluan town celebrate the arrival of solar power panels that would end their ordeal with unreliable electricity supply. —PHOTO FROM REV. JERRY JALOS

Gerry Causapin, a priest in the town, said excess electricity from the microgrid could be used by nearby towns.

Paluan’s current consumption was only about 1 megawatt, which Leviste said was only “a fraction” of what the microgrid can actually produce.

Leviste’s company offered to sell electricity at just P9 per kilowatt hour, which was lower by more than half the current cost of power from the main grid.

Occidental Mindoro Rep. Josephine Sato said she initially had doubts about the reliability of solar power but now believed that “this project should be replicated all across Mindoro.”

Leviste said his company planned to expand to Panay, Negros, Samar and parts of Mindanao.