newsinfo / Nation
Nation
6 people on board the aircraft died 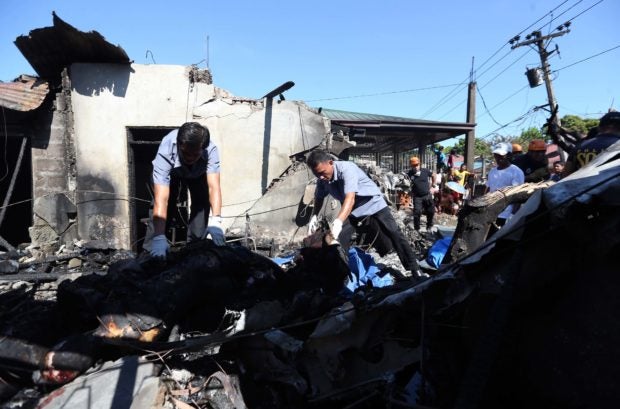 Funeral services staff taking out the bodies from the site where a Piper 23 Apache aircraft crashed in Barangay Lumangbayan, Plaridel, Bulacan shortly after take-off from Plaridel Airport. At right is the electrical post which the plane was said to have clipped before crashing into the bungalow-type house below. INQUIRER PHOTO/LYN RILLON

A six-seater twin-engine light aircraft crashed minutes after taking off from the Plaridel Airport in Bulacan on Saturday morning, killing the pilot, his co-pilot and four passengers, the Civil Aviation Authority of the Philippines (CAAP) confirmed.

Eric Apolonio, CAAP spokesman, said that the Piper PA-23 Apache aircraft, with registry number RP-C299 operated by Lite Express, crashed on a residential area a few minutes after take off at 11:21 a.m.

The aircraft, flown by Capt. Ruel Meloria and co-pilot Efren Patugalan, took off from the runway of the Plaridel Airstrip in Barangay (village) Lumang Bayan about 11:30 a.m. when it stalled and plunged into the house of Luisa Santos at Purok 3 in the same village, said Supt. Julio Lizardo, Plaridel police chief.

Reports said the plane and the house burst into flames. Rescuers have not been able to determine if the people in the house were killed or have managed to escape, Lizardo said.
The police have yet to identify the plane’s passengers.

In an interview with radio dzMM, Police Chief Insp. Agustin Joseph, Deputy for Operations in Plaridel, said that the plane crashed on a house where a family was having their lunch.

Fire fighters have already snuffed out the blaze brought about by the crash, the police official said, adding that rescue personnel were trying to recover the bodies of victims.

Apolonio said that six passengers were on board the aircraft when the incident happened. They were reportedly bound for Laoag Airport, he said.

“CAAP’s accident investigators and a team from the Flight Safety and Inspectorate Service were immediately dispatched to the crash site,” Apolonio said in a text message.

In addition, all aircraft operated by Lite Air Express would be grounded pending results of the investigation, the CAAP spokesman said. /jpv

This is a developing story. Please refresh this page