Warning up, lights out vs total Boracay shutdown 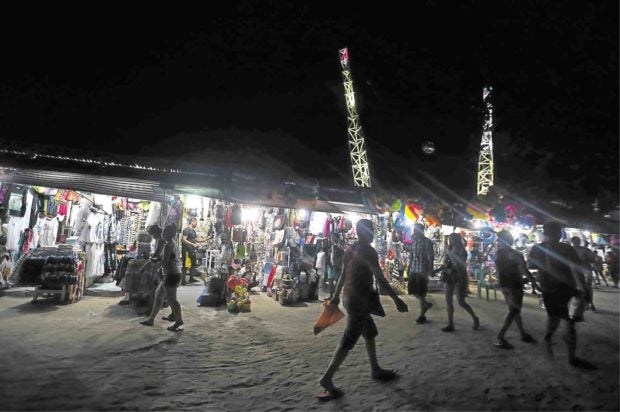 SHOPPING IN PARADISE Closing the entire Boracay Island to tourists could be crippling to shops big and small, according to some lawmakers and business groups. —LYN RILLON

A total closure of Boracay could cripple the tourism industry and devastate locals who depend on beach-loving tourists for their livelihood, Sen. Joel Villanueva warned on Friday, a day after three Cabinet members recommended a yearlong shutdown of the island.

In a statement, the senator warned of dire consequences if the government went ahead with the advice of Environment Secretary Roy Cimatu, acting Interior Secretary Eduardo Año and Tourism Secretary Wanda Teo to close down Boracay, widely considered the jewel of Philippine tourism.

The government task force on Boracay has recommended that President Duterte place the island under a state of calamity and close it for up to a year to solve the water pollution, traffic congestion, garbage problems and illegal constructions plaguing the world-famous tourist destination.

Following a meeting in Makati City on Wednesday afternoon, the task force said the closure was necessary so that the government could focus on solving the island’s various problems.

“The full closure of Boracay could cripple our local tourism industry. It could also have a devastating economic impact on the businesses that are compliant, and on the formal and informal workers who rely on the island for their livelihood,” Villanueva said.

He noted that while a similar action had been taken in Thailand’s Phuket province, the effect would be more severely felt in the Philippines, whose tourism infrastructure was not as well developed as its neighbor’s.

In a show of support by business and other groups for government initiatives to clean up the resort and to plead to authorities not to push through with plans to close the island down, all lights would be turned off in the entire island of Boracay on Saturday.

A movement called Boracay United would start the lights-off activity at 8:08 p.m. and keep the lights turned off for at least eight minutes, according to Pia Carmela Miraflores, executive director of business group Boracay Foundation Inc.

“This is to show our love for the island and our commitment to do our part in saving it,” Miraflores said.

Bars, restaurants and hotels were also asked to turn music off during the eight-minute activity.

“The darkness and silence will demonstrate what Boracay will be like if the island was shut down,” Miraflores said.

Boracay United asked tourists and residents to go to the shoreline and switch on their flashlights or the lights of their mobile phones.

A program would be held along the shoreline.

Business groups and many residents of the 1,032-hectare island have voiced support for government efforts but have called for the closure only of establishments found violating laws.

Presidential spokesperson Harry Roque on Friday said Mr. Duterte would take into account the small resort owners when he decides on the fate of Boracay, as they are the ones that would suffer.

Sen. Nancy Binay said total closure might not be the best solution.

“A phase-by-phase rehabilitation where [the] government can strictly enforce the law and at the same time implement the needed corrective measures could be the better option for Boracay,” she said.

Sen. Sherwin Gatchalian offered the following alternative steps instead of a total shutdown of the island:

Shut down and file cases against the 300 violators of the Building Code and environmental laws;

File administrative cases against the LGUs (local government units) [that] neglected to perform their mandated duties to manage and protect the island;

Mandate all businesses within 30 days to improve their waste disposal systems;

Implement a 90-day phasing of the improvement of critical infrastructure such us drainage systems and solid waste management; and

Formulate a long-term sustainable master plan for everyone in the island to adhere to.

Cimatu said the task force made four major recommendations, foremost of which was the upgrading of the sewerage system, including the sewer lines, in order to meet the requirement of the entire island as a major tourist destination.

Meanwhile, the management of D’Mall of Boracay has belied allegations that its commercial establishment is built on wetlands.

D’Mall is a sprawling, outdoor shopping and dining center located between Station 1 and Station 2 at Barangay Balabag, Boracay Island.

“As a matter of good corporate governance and being a pioneering developer in Boracay, we have always known that it’s the pristine beauty of the island that makes it a global attraction,” Rudolph Jularbal, head of the legal and regulatory compliance group for D’Mall, said in a statement.

“As such, it’s imperative that our establishments in Boracay conduct business in a manner that’s environmentally sustainable and socially responsible. This is what guides us and we have encouraged other establishments to follow suit,” he added.

Based on tax declaration documents filed with the local government, the area where D’Mall was constructed was a composite of lands that were classified as commercial, agricultural, residential and cocal, referring to lands planted with coconut trees, Jularbal said. —WITH A REPORT FROM LEILA B. SALAVERRIA