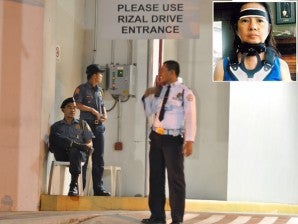 It’s not first class but it will do.

The Southern Police District (SPD) has begun sprucing up a room in its camp in Fort Bonifacio in Taguig City should the Pasay City Regional Trial Court (RTC) order that former President Gloria Macapagal-Arroyo be held there.

Arroyo is currently under hospital arrest at St. Luke’s Medical Center-Global City in Taguig on charges of electoral sabotage.

The SPD’s public information office was rearranged to accommodate a cot on which Arroyo, now a Pampanga representative, could lie while in detention, according to SPD spokesperson, Chief Inspector Jenny Tecson.

“We have been instructed by our officer in charge to begin preparing for the eventuality of the former President’s detention in our headquarters,” Tecson said in a phone interview.

The air-conditioned room measures 3 by 6 meters and has a sink with running water. A modest bathroom is off to one side.

An official of the Catholic Church’s prison ministry said Arroyo could spend detention under the care of a hospital or even the comforts of her home.

But militant groups said no special treatment should be given to Arroyo.

Before its conversion, the public information office also served as a library and lounge for reporters covering the SPD, whose jurisdiction covers the cities of Makati, Pasay, Taguig, Parañaque, Las Piñas and Muntinlupa, and the municipality of Pateros.

Senior Superintendent James Bucayu, deputy district director for administration and SPD officer in charge, wanted the room to be ready by Monday morning when Pasay RTC Judge Jesus Mupas receives the return of the arrest warrant from the police, Tecson said.

Rodolfo Diamante, executive secretary of the Episcopal Commission on Prison Pastoral Care, said the commission would not object to a hospital or a house arrest for Arroyo.

“For humanitarian reasons, it should be provided,” Diamante told reporters, citing the bad conditions prisoners suffer under the current jail system. “They can’t confine her in our jails.”

He also pointed to Arroyo’s poor health condition, not her being a “very important person,” as the main reason why the former President should be allowed to be placed under either a hospital or house arrest.

“Health-wise… that should be the No. 1 consideration,” Diamante said.

But he said the same treatment must also be accorded to inmates with medical conditions who are languishing in cramped detention cells with deficient health facilities.

The Commission on Prison Pastoral Care is advocating restorative justice, which includes better conditions in the country’s jail facilities and humane treatment for prisoners, especially the sick and elderly.

To drive home their point that Arroyo should not be given special treatment, some 20 men, women and children on Sunday staged a protest at St. Luke’s Medical Center.

They popped out of two vehicles with placards and attempted to proceed to the hospital driveway. Police officers pushed them to a sidewalk in front of the hospital.

Senior Superintendent Tomas Apolinario, Taguig City police chief, told the protesters belonging to Bayan Muna, Selda and Health Alliance for Democracy that they did not have a permit to carry out any mass action there.

The police chief gave the protesters 10 minutes to air their gripes and demands. The group then dispersed peacefully.

Police on Friday served the warrant of arrest on Arroyo in connection with the electoral sabotage charges filed by the Commission on Elections in the Pasay City RTC. She was booked, fingerprinted and photographed in her hospital room on Saturday.