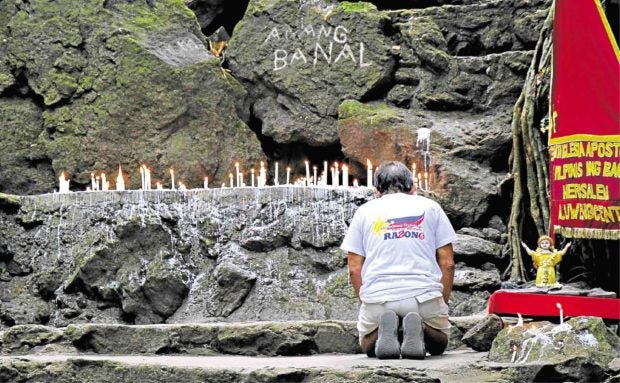 LUCENA CITY—The agency tasked to protect Mt. Banahaw in Quezon province has reiterated its appeal to pilgrims and mountaineering groups to avoid venturing into areas closed off to the public while keeping its forests and prayer spots clean this Lenten season.

“We can all have a hassle-free Holy Week as long as they will obey basic rules—no trespassing in the prohibited areas and observe proper garbage disposal,” said Salud Pangan, park superintendent for Banahaw and San Cristobal of the Department of Environment and Natural Resources (DENR).

Mt. Banahaw and Mt. San Cristobal straddle the towns of Lucban, Tayabas, Sariaya, Candelaria and Dolores in Quezon; and parts of the towns of Rizal, Nagcarlan, Liliw and Majayjay, and San Pablo City in Laguna province.

“With the recent fire [that hit Banahaw], we will strictly regulate activities within the allowed areas and give extra focus on disaster preparedness,” Pangan said.

On March 6, a forest fire destroyed more than 35 hectares of grassland atop Mt. Masalukot in Candelaria and a portion of MBSCPL.

Authorities blamed slash-and-burn farmers (“kaingero”) as the culprits behind the fire.

The DENR-PAMB team has put up warning signs and advisories in different spots at the mountain villages of Sta. Lucia and Kinabuhayan in Dolores town to guide visitors.

Starting Palm Sunday, DENR forest rangers, assisted by volunteer mountaineers, policemen and soldiers, will be posted in select spots at the base of the mountain to stop visitors from entering closed areas.

The government, in 2004, sealed off areas at the bosom of Mt. Banahaw to allow forests to regenerate after years of abuse by pilgrims and trekkers. These sections will be reopened in February 2019.

Officials, however, said some people were able to enter Banahaw’s prohibited areas by creating new trails and due to their determination to reach the summit.

She also asked the public not to patronize groups offering an “unrestricted” access to the summit for a fee.

“We will implement a no permit, no camping policy this time. Any group who wants to pitch tents should secure the required permit from the PAMB office in the village,” Pangan said.

The MBSCPL-PAMB will collect a P20 fee for the mountain’s upkeep while village councils will collect a P50 entrance fee for private vehicles and passenger jeepneys, and P20 for tricycles. —DELFIN T. MALLARI JR.