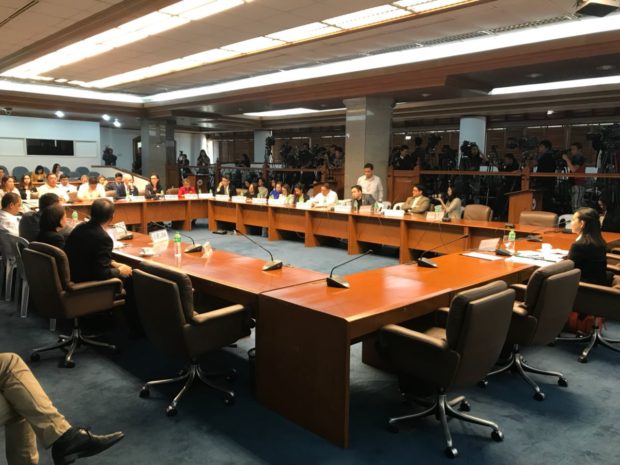 At the continuation of the hearing of the Senate committee on public information and mass media, Roque insisted his objection to Poe’s proposal contained in Senate Bill No. 1680, saying it “enjoys an overwhelming presumption of unconstitutionality.”

“If we’re going to penalize fake news, who will judge what is fake news and what is news? Because the current frame right now, it’s the public that should be allowed to decide what is true from what is false,” the spokesman said during the hearing.

“Madam chair, I’ve been a victim of fake news. It comes with a territory. And we can only hope that because people were given by God the ability to discern what is true and what is false, its ultimately the public and the free market place of idea that should adjudge what the truth is and that should put ultimately the penalty on purveyors of fake news,” Roque said.

But Poe explained that she is not proposing a new law since there is an existing law, the Revised Penal Code that already criminalizes misinformation or fake news.

And if Roque wants to discuss further about her bill, the senator said it should be the Senate committee on civil service that should tackle it.

“I’m sure you believe to yourself that although there’s a free market of idea, we have to endeavor to always be responsible in ferreting out the truth. Do you agree sir?” Poe asked.

Roque answered yes and went back to assail again the senator’s proposal, which he said “singles out” government employees spreading fake news.

“That to me is additionally possibly infringing on equal protection because we are in effect singling out government employees,” he said.

“What is the importance of regulating fake news? It’s because we want to uphold the truth. If the objective is to uphold the truth, it does not matter if it’s a legitimate journalist or a blogger that spreads false news. And that’s why my position is there is no basis for singling out that only government employees should have liability when they spread false news…” he added.

But Poe argued that her proposal “applies to all” except that government officials and employees are “held to a higher standard.”

Unlike an ordinary citizen, for instance, she said, government employees are required to submit statement of liabilities and net worth and they can also be charged with graft and plunder.

“So there are certain things that are expected of us because we’ve waived that certain right because we are serving the people and we have to be able to be transparent , to be held to a higher standard…” Poe said.

Poe stressed that she was not proposing to “over-regulate” as she was just trying to put safeguards.

“We’re not trying to take away anyone’s rights here,” she added.

And when Roque insisted his objection on the bill, Poe advised the spokesman to just attend a Senate hearing on her bill.

“As I’ve said, Mr. Roque we’ve always been, most of the time, on the same side of the fence. Correct?” she said, “We’re here to defend the truth. Nandito para dyan at ito namang position natin hindi naman panghabambuhay e (We’re here for that and our positions are not for life).” /je/ac

Read Next
Suspected NPA guerrillas fire at paramilitary base in Batangas
EDITORS' PICK
House energy committee chair Arroyo bats for cheap electricity
Taal Volcano emits 13,572 tons of sulfuric gas, causing ‘vog’ over caldera
A laptop that maximizes your WiFi so you can maximize your productivity
Powered by style, innovation and passion
Marcos bats for close coordination on food supply between nat’l, local governments
Vasculitis nearly turned Ashton Kutcher blind, paralyzed. What is it?
MOST READ
DepEd condemns molestation of teachers in Camarines Sur
J&J to end global sales of talc-based baby powder
Ex-DBM exec Lao of Pharmally mess tagged in overpriced DepEd laptops
Anne Heche ‘not expected to survive’ after crash—reports
Don't miss out on the latest news and information.