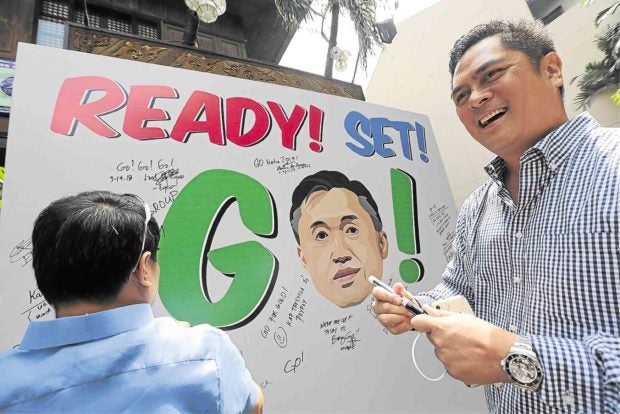 Secretary Martin Andanar joins those who are trying to convince Special Assistant to the President Bong Go to run for senator. —GRIG MONTEGRANDE

President Rodrigo Duterte wants three of his closest officials to join the Senate, according to Presidential Communications Secretary Martin Andanar.

Andanar said Mr. Duterte vowed to back the candidacy of his right-hand man, Christopher “Bong” Go, “to the hilt.”

The President is also supporting the possible Senate run of his spokesperson, Harry Roque, and of his political adviser, Francis Tolentino, he added.

Supporters of Go, who has never held public office, officially launched on Wednesday in Intramuros, Manila, a movement encouraging him to stand in the 2019 elections.

Andanar clarified that the clamor for Go to seek a seat in the legislature is not a form of early campaigning.

The campaign, dubbed “Ready, Set, Go!” is not a launch of Go’s candidacy but a campaign for him to join the senatorial race next year, he said.

“I think for me, it’s not early campaigning because we are still trying to convince Bong Go to run,” Andanar told reporters. “This is an initiative of friends, and it has already snowballed.”

Andanar said the President, in explaining his decision to support Go for the Senate, cited the latter’s long experience as his aide when he was in Congress and a Davao City official.

“So that’s what the President said: It’s time for SAP Bong Go to shine and to go up, grow more and level up. And he will not stop him but instead, he will support Bong Go to the hilt,” he said.

Go said initial calls for him to run were made in jest.

‘It started as a joke’

“All these started as a joke, but with the overwhelming support and encouragement of no less than Mayor Rody and his supporters, I cannot just set this aside,” he said in a statement.

“For him to say that he also wants me to seek a higher post, to prove something to myself … only shows how unselfish Mayor Rody is,” Go added.

Roque, who was the Kabayan party-list representative in the House before moving to Malacañang, reiterated that he did not have the funds to mount a national campaign.

“[I] don’t have P500 million. I thank [the President] for the support, but I don’t have the money,” he said. —With a report from Jhoanna Ballaran