Another Pangasinan town declares calamity state due to armyworms 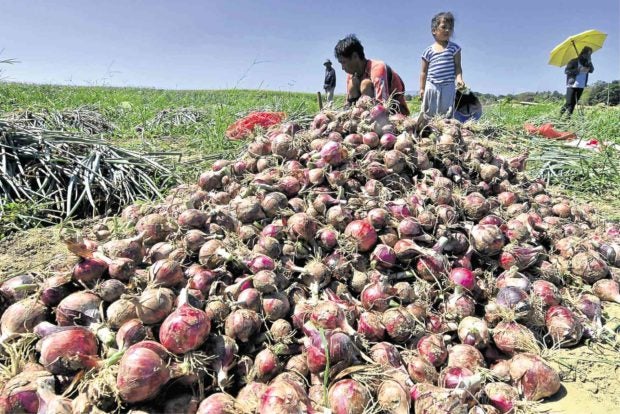 BAYAMBANG, Pangasinan — The municipal council on Monday placed this town under a state of calamity after armyworms destroyed 867.46 of 1,480 hectares of onion farms in 40 villages.

Bayambang is the second town in Pangasinan province to be placed under the emergency state. On Feb. 12, neighboring Bautista town was also declared a calamity area after armyworms wiped out 289.3 ha of the town’s 300 ha of onion farms.

“We tried to stop the armyworms. But they seemed to have become resistant to insecticides,” said Artemio Buezon, the town’s agriculturist.

Armyworms, which attack at night, breed in grassy patches near the farms. A female worm lays about 800 to 1,000 eggs that can hatch into a million worms. The worms suck the sap from onion leaves, eventually killing the plants.

Buezon said the infestation can cause losses, reaching hundreds of millions of pesos, to some 200 onion farmers in the town.

Worst-hit areas were the villages of Manambong Parte, Manabong Sur, Amancosiling and Buayaen, Buezon said, adding that the town’s onion production this year would significantly decrease.

Bayambang is Ilocos region’s top onion producer. In 2015, it produced 100,500 kg or one-third of the region’s total onion yield.

Aside from this town and Bautista, the towns of Alcala and Malasiqui also produce onions.

“Given this situation, there could be fewer supplies of onions and their prices will rise. The government may also decide to import,” Buezon said. —GABRIEL CARDINOZA