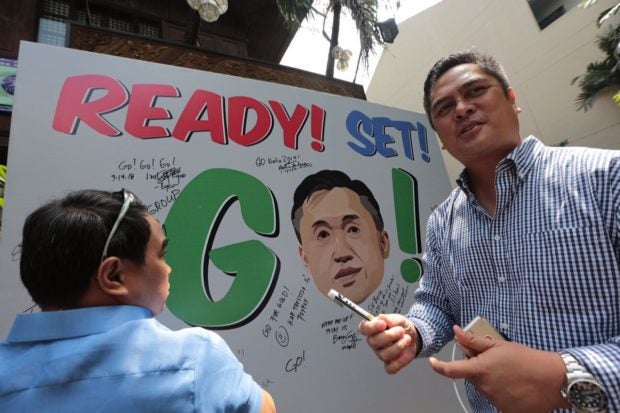 Communications Secretary Martin Andanar and Undersecretary Joel Sy Egco, executive director of the Presidential Task Force on Media Security, arrive at the launching of a movement calling for Special Assistant to the President Bong Go to join the 2019 Senate race. Supporters of the “Ready, Set, Go!” are urging Go to run for a Senate seat by signing on the “Bong Go wall.” INQUIRER PHOTO/ Grig C. Montegrande

Supporters of Special Assistant to the President (SAP) Christopher Lawrence “Bong” Go officially launched on Wednesday a movement encouraging the loyal presidential assistant to run for a Senate seat in 2019.

As this developed, Communications Secretary Martin Andanar clarified that the clamor for Go to run in the senatorial derby is not a form of early campaigning.

Andanar said that the campaign, dubbed as “Ready, Set, Go!,” is not a launch of Go’s candidacy for the Senate but a campaign for him to join the senatorial race next year.

“I think for me hindi siya maaga (It’s not early campaigning) because we are still convincing him to run. It’s not a launch for candidacy, it’s actually convincing SAP Bong Go to run for Senate,” Andanar said in an interview with reporters.

“Ito naman ay initiative ng kaibigan, barkada, so nag-snowball na. May mga supporters din na kasali, we are not discouraging them, they would and they can go,” he added.

(This is an initiative of friends, so it snowballed. There are also supporters who took part, we are not discouraging them, they would and they can go.)

It was reminiscent of Duterte’s bid for the presidency in 2016, in which he had repeatedly said that he would not run for office despite a public campaign called “Duterte for President Movement” urging him to run.

Go had repeatedly said early this year that he would not run for office because he only wanted to serve Duterte “til kingdom come.” However, last week, Go apparently sent mixed signals by saying that his candidacy would be up to his boss.

(It is too early to speculate, we are here at GoNegosyo. It is all up to the President.)

READ: Bong Go on Senate run: It’s up to Duterte

Andanar, in a previous interview, said that if Go runs, he would be in the top five senatorial bets. /jpv