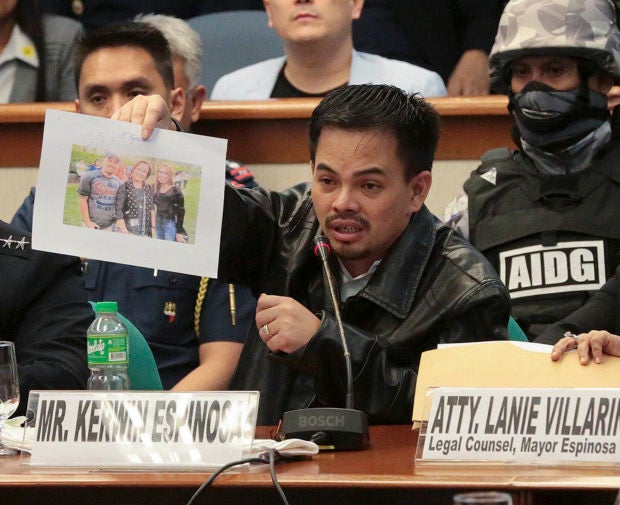 Senators slammed on Tuesday the move by state prosecutors to clear suspected drug lords Kerwin Espinosa and Peter Lim from drug charges, warning that the administration’s war on drugs would be adversely affected.

They expressed hope that Justice Secretary Vitaliano Aguirre II would reverse the dismissal of the drug trafficking charges.

But Vice President Leni Robredo wondered whether the Department of Justice (DOJ) still deserved to be trusted by the public.

Robredo said the decision of a DOJ panel of prosecutors to dismiss the charges against Espinosa and Lim was frightening.

“First of all, because one of them is a confessed drug pusher. In fact, one of them is a witness against Senator [Leila] de Lima who is saying they gave her money out of drugs. What does that say?” she told reporters.

Robredo was referring to Espinosa, who claimed during a congressional inquiry that he had given millions of pesos to De Lima through her former driver Ronnie Dayan during her time as justice secretary.

De Lima has been detained at a Philippine National Police facility in Camp Crame since February last year due to drug-related charges, which she calls “politically motivated and trumped-up.”

Sen. Richard Gordon, whose blue ribbon committee investigated the allegations against Espinosa, also wondered why the administration was waging an antidrug war “only to dismiss” the cases of big fish.

Gordon noted that during the Senate inquiry last year, Espinosa testified he was into the illegal drug trade, admitted to giving protection money to someone and narrated his life in prison where he had made drug deals.

Espinosa, Lim and several others were absolved by a DOJ panel of prosecutors due to the alleged weak evidence presented by the Criminal Investigation and Detection Group (CIDG) and the “inconsistencies” in the testimony of its lone witness, Marcelo Adorco, who was also cleared of the charges.

The resolution was issued on Dec. 20, 2017, but the media came to know about it only on Monday.

Gordon said President Rodrigo Duterte’s war on drugs would be hurt if the matter was not resolved properly. “I am advising the President … that he should look into this right away.”

Senate Minority Leader Franklin Drilon doubted that Aguirre had not been informed by the DOJ panel of its decision to drop the charges against Lim and Espinosa.

“Having said that, the President should review this, because the Office of the President has supervision and control over all Cabinet secretaries,” Drilon told reporters.

Senators Grace Poe, Bam Aquino and Antonio Trillanes IV were convinced that the DOJ panel should have established probable cause to indict Espinosa and Lim for illegal drug trafficking.

Sen. Panfilo Lacson said Espinosa at the least should have been charged based on the evidence that was presented in the Senate inquiry.

Poe said she was “disturbed” by the basis used by the DOJ panel in recommending the dismissal of the charges.

“How a confessed drug lord like Kerwin Espinosa can be exonerated by the State, is perplexing. It reflects the sloppiness of the police’s investigation and case buildup against these drug lords,” Poe said in a statement.

“Is the prosecution really searching for evidence?” she asked.

For his part, Trillanes said the dropping of charges against the two suspected drug lords showed that Mr. Duterte’s war on drugs was fake.

“If the person is poor, no more questions are asked and he is killed immediately,” Trillanes said in a statement.

“If the persons involved are drug lords and they are the compadre (wedding cosponsor) of Mr. Duterte, due process is observed and they are absolved.”

Trillanes also noted that De Lima, a vocal critic of the President, ended up being charged in court even if the scripted testimony against her was all tangled.

The Liberal Party (LP) also took the line of Trillanes.

The political party said De Lima was innocent of the illegal drug charges filed by the government against her.

Justice for a few

The exoneration of suspected drug lords has cast doubt on the administration’s antidrug war, Aquino said.

“Justice is only for a few and not for each Filipino,” he said in a statement.

Senate President Pro Tempore Ralph Recto said the dropping of the charges was a “blow to government credibility in its antidrug operations.”

Sen. Win Gatchalian said the turn of events was a “big setback in achieving a drug-free society in our country.”

Magdalo Rep. Gary Alejano noted that the basis of the alleged involvement of Espinosa and his father, the slain Albuera, Leyte Mayor Rolando Espinosa, in the illegal drug trade was Mr. Duterte’s drug list.

Thus, he said, the DOJ’s dismissal of the complaint due to lack of evidence “is short of admitting that the drug list of Duterte is unfounded and unreliable.”

Alejano also slammed the hypocrisy of the administration drug war. “Big-time drug lords are acquitted, while poor small-time drug users face death at an instant. This is supposedly how the ‘justice’ system works under the Duterte administration,” he said.

Like Alejano, Albay Rep. Edcel Lagman said the dismissal of charges against Espinosa and Lim demonstrated the administration’s policy of selectiveness in implementing the law.

“The policy of the Duterte administration is to liberate drug lords and liquidate small fry,” he told a news conference.

“What is sauce for the gander is sauce for the goose. Senator De Lima has spent a year in detention even without a formal trial. If this is what happens, all the more the need to release the good senator,” he said.