Ban Duterte from any federal gov’t, UP professor insists 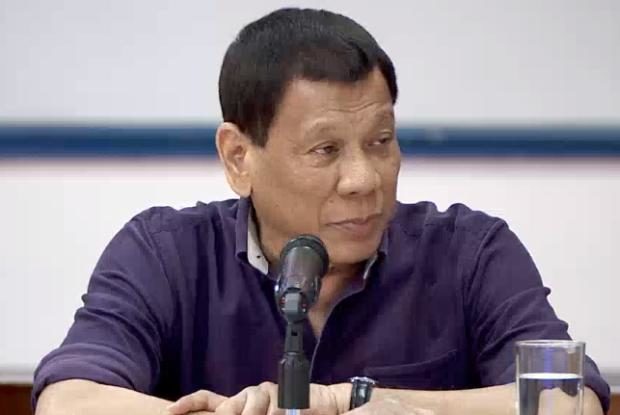 To ensure that President Rodrigo Duterte would not extend his term beyond 2022, a UP professor dared proponents of federalism on Tuesday to include a provision that would bar him from running again for the same position once a new federal form of government is approved.

Professor Gene Lacsa Pilapil issued the challenge during the ongoing joint hearing on Charter change proposals led by the committee on constitutional amendments being headed by Senator Francis “Kiko” Pangilinan.

Duterte and members of his government have repeatedly declared publicly that he had no intention of extending his stay in power. At one point, the President ordered the military to “shoot” him if he extended his term even for one day.

READ: Roque: Duterte wants to cut short his term, not extend it / If I exceed my term, shoot me, Duterte orders troops

“Write down a provision banning the incumbent president to allay the valid fears of many Filipinos that this shift to federalism is part of the same script of the current president and his key allies to remain in power beyond his constitutionally mandated term limit under the 1987 Constitution,” Pilapil said, reading from a prepared statement.

The challenge was directly issued to all the proponents of federalism from the ruling PDP-Laban being chaired by Duterte to members of the House of Representatives and the Consultative Committee formed by the President himself.

Pilapil said Duterte’s promise to step down in 2022 even if a federal constitution is passed was “as good as his campaign promise to ride a jet ski to the Spratlys.”

“To make sure that in 2012 he does not tease the country for believing him in 2018 that he will step down once his term ends under the 1987 Constitution and not run again for president, institutionalize his promise to step down by constitutionally barring him to run in your proposed federal constitutions,” he said.

Back in January, Presidential Spokesperson Harry Roque already said that the transitory provision of any new constitution must ensure that Duterte would not extend his term beyond 2022.

The professor pointed out that in the approved concurrent resolution in the House that seeks to convene Congress into a Constituent Assembly to propose amendments in the 1987 Constitution, and even in the proposed shift to federalism, there was no provision that would bar the incumbent president from running under a new Constitution.

The question of term extension of the incumbent president, he said, becomes a “central concern” whenever a new constitution is introduced in a presidential democracy with existing term limits for the president.

“This is not based on the ‘fear of the new’ but on knowledge of previous constitutional episodes involving elected strongmen who tried to skirt term limits of their democracies by coming up with a new institution,” he said, citing as example some leaders whose terms had been extended because of new constitutions. /cbb