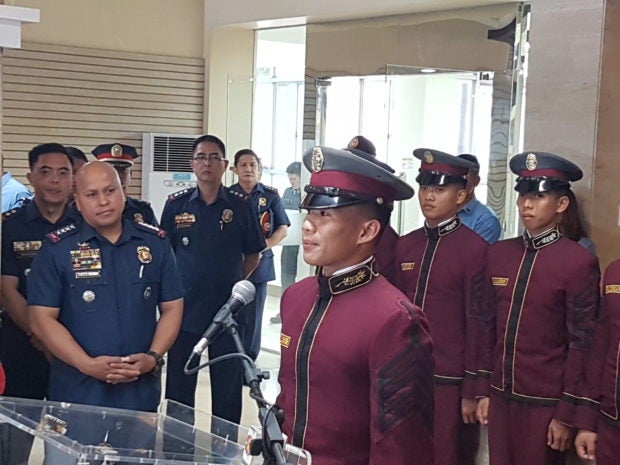 He grew up without a father, while his mother toiled as a domestic helper in Spain. But this unconventional setup did not stop Police Cadet Fritz John Napalinga Vallador from graduating at the top of his class at the Philippine National Police Academy (PNPA) this year.

As valedictorian of the PNPA Maragtas Class of 2018, Vallador will receive the Presidential Kampilan Award and Plaque of Merit from President Duterte on March 21 at Camp General Mariano Castañeda in Silang, Cavite province.

“It’s just normal,” said the 24-year-old Vallador, who never met his father but was lucky to have someone else fill in that role.

“Even if I didn’t have my [biological] father with me, I am here in front of all of you. I persevered even without a father. I became successful,” he told reporters on Monday.

Vallador said he entered the PNPA to fulfill his dream of becoming a policeman who would uphold and promote the law.

Vallador, who hails from Kabankalan City, Negros Occidental, and others in the Top 10, including two female cadets, were presented by PNP Director General Ronald dela Rosa to the media in Camp Crame.

He would have wanted his mother, Ana Maria, to attend his graduation but she could not come home. It saddened him, but he wished she would be able to watch his media interview at the very least.

Vallador’s graduation day would remain special since his aunt, who took care of him like he was her own son, since he was in Grade 5, will be standing in for his mother at the ceremony.

Vallador said the Maragtas Class would serve the country with honor even at the cost of their lives.

They were also prepared to be assigned to any part of the country, or the world, no matter the risk, he added.

The Maragtas Class is composed of 79 male and 27 female graduates.

Female cadets have often made it to the Top 10 of the
PNPA graduating class and Montaño said the academy had become the female cadets’ “avenue to develop our skills, character and competence.”

“Many still look at women as being unable to do what men do. But the two of us proved that we can still excel in a profession dominated by men,” Montaño said, referring to herself and Ansus.

She said it had always been her childhood dream to “become part of an organization that ensures public safety.”

Dela Rosa reminded the Maragtas Class to “maintain the standards of the PNPA as they enter the PNP.”

Angel Locsin: Pimentel should be summoned by NBI instead of Vico