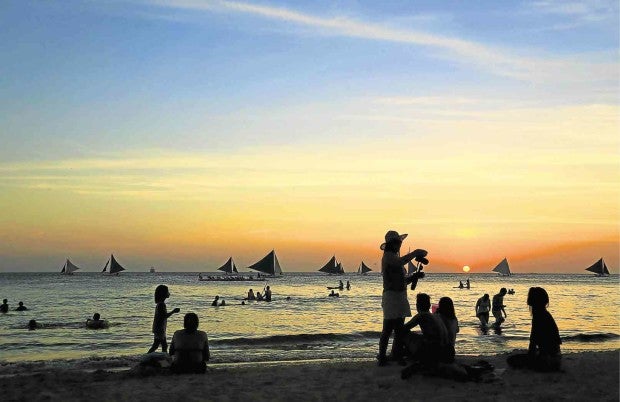 SUNSET IN PARADISE. Tourists enjoy the sunset on Boracay Island, one of the top destinations in the country known for its powdery-white sand, turquoise waters, and vibrant nightlife. (INQUIRER SOUTHERN LUZON FILE PHOTO)

The Department of Interior and Local Government (DILG) is set to recommend the declaration of a state of calamity in the island paradise of Boracay, an official said on Monday.

DILG OIC-Secretary Eduardo Año would be submitting this proposal to the National Disaster Risk Reduction and Management Council (NDRRMC) within this week.

DILG Assistant Secretary Epimaco Densing III said the NDRRMC would then forward the recommendation to President Rodrigo Duterte, who shall issue the declaration place Boracay under a state of calamity in order to fast-track the rehabilitation of the famous tourist destination.

(We will send a letter to be signed by Secretary Año to the NDRRMC because it is the one who recommends to the President the area to be placed under state of calamity.)

“In this case, state of calamity [will be declared] because of human hazard and calamity,” he added.

Last week, Mr. said he is inclined to declare a state of calamity over Boracay as he ordered the DILG and Department of Environment and Natural Resources (DENR) to clean up the world-renowned island within six months.

He also cautioned the courts against interfering in the government’s measure to address Boracay’s deterioration by issuing a temporary restraining order.

Mr. Duterte likewise warned resort owners and local officials to cooperate in the clean-up, noting that those who would “put up a fight” may face sedition charges.

According to Densing, once Boracay is placed under a state of calamity, the government could tap calamity funds to fast-track the infrastructure rehabilitation of Boracay.

(Even the Australian government is willing to help to reverse the negative environmental problem in Boracay.)                   /kga