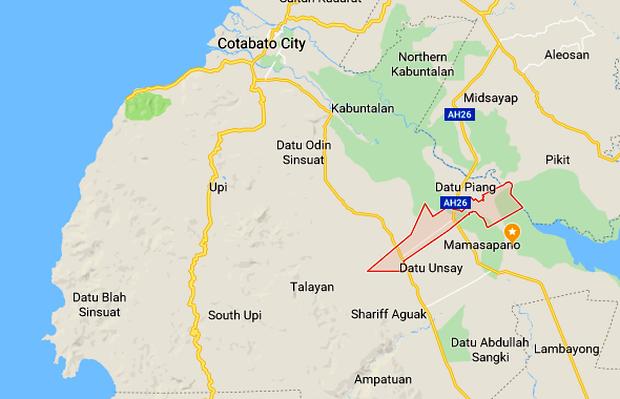 CAMP SIONGCO, Maguindano — The military on Sunday claimed that at least 44 Bangsamoro Islamic Freedom Fighters (BIFF) gunmen were killed in the series of air strikes and ground offensives it had been conducting in Datu Saudi Ampatuan town since Thursday.

According to the 6th Infantry Division chief, Lt. Gen. Arnel dela Vega, the operation also led to the recovery of a dozen rifles, improvised explosive devices (IEDs) and a black flag similar to the one used by the Islamic State.

The hostilities erupted on Thursday when elements of the 2nd Mechanized Infantry Battalion, commanded by Lt. Col. Alvin Iyog, who were conducting operations engaged the group of BIFF Commander Peni in Sitio Lapitos in Lower Salbo in Datu Saudi Ampatuan town on Thursday.

“The firefight was so intense and resulted in the slight wounding of one of my men, but we kept on pounding them with heavy fire,” Iyog said.

He said his men pursued the BIFF gunmen, who retreated toward the inner portion of Datu Saudi town, and recovered “so many IEDs, high powered firearms, ammunition, and personal belongings all stained with so much blood.”

“Some of our equipment were also damaged because we have to swim across chest-deep water just to get close to the BIFF,” Iyog added. “Cellular phones, handheld radios and other electronic gadgets were all drenched in water, but we have to pursue the fleeing gunmen. We know we hit them fatally.”

Dela Vega said the number of BIFF fatalities had been validated by residents of the affected barangays, especially those who evacuated from the area.

“Some of them, especially the relatives of the fatalities, even led government operatives to the gravesite where the BIFF immediately buried their remains,” Dela Vega said.

Abu Misri Mama, the BIFF spokesperson, said they indeed suffered casualties but nowhere near the figure the military had released.

“It was much lower than that,” he said.

As of Sunday, tension remained in Datu Saudi town and nearby villages in Datu Unsay town where soldiers had been deployed.

At least 2,500 individuals who fled the affected villages had not returned home and were now in evacuation centers in the towns of Mamasapano, Datu Salibo and Shariff Aguak. /atm