Cops have a right to remain silent, too – Duterte 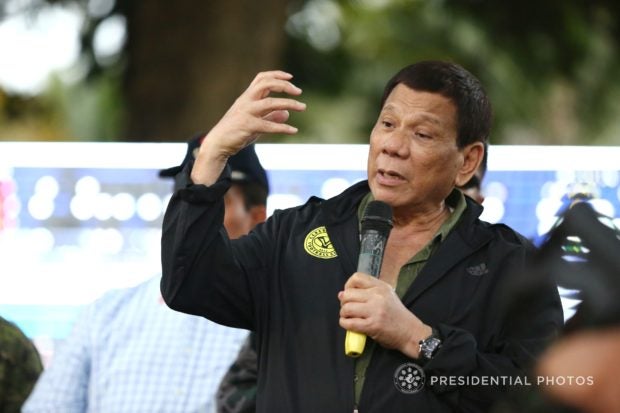 ZAMBOANGA CITY—President Duterte on Saturday ordered soldiers and police not to answer questions from human rights investigators, saying their silence was constitutionally protected and this would avoid conflicting statements.

The President’s order follows an announcement by International Criminal Court (ICC) prosecutor Fatou Bensouda last month that she would start a preliminary examination of a complaint accusing Mr. Duterte of crimes against humanity in connection with his bloody war on drugs.

It also comes on the heels of a statement by Malacañang that it would welcome a UN investigation into alleged human rights violations in the antinarcotics campaign so long as it was not led by Agnes Callamard, the UN special rapporteur on extrajudicial killings.

Mr. Duterte and his spokesperson Harry Roque said Callamard was biased because of her early criticisms of the bloody antidrug campaign.

“Do not answer questions from them and that is for a reason,” Duterte told troops in a speech at the Andrews Air Base in Zamboanga City on Saturday.

“It’s legal. That is provided for in Constitution itself, our Constitution,” he said of keeping silent.

He said that as a former trial lawyer for nine years he knew that “any statement or answer that you may give might incriminate you.”

“So the best way is to keep silent,” he said.

He said soldiers and police officers could point to him as the commander-in-chief who gave the instruction not to talk.

He told them to answer queries from investigators this way: “I am sorry. The Constitution does not allow it. And our commander-in-chief says we shut up.”

He said “there will never be uniformity” and there would be “many holes” in the answers of law enforcement and security authorities since they were not all similarly situated.

Their answers to investigators’ questions would then be “convoluted, mixed up and that places us in jeopardy,” he said.

The President said he would take “full responsibility” for his antidrug campaign.

“Just do you job … within the bounds of the law,” he said, adding that he never ordered authorities to kill “those fools” who could not put up a fight.

He said his order to law enforcers was to “destroy the (drug) organization.”

“What is wrong with that?” he said. “Can I not protect my country by killing people and destroying (the drug) apparatus?”

He said he was willing to go to jail for his actions.

“Do not worry,” he said. “That’s not a problem, just don’t reply (to questions) officially.”

He joked that he would even fly to any jail “if they give me five women.”